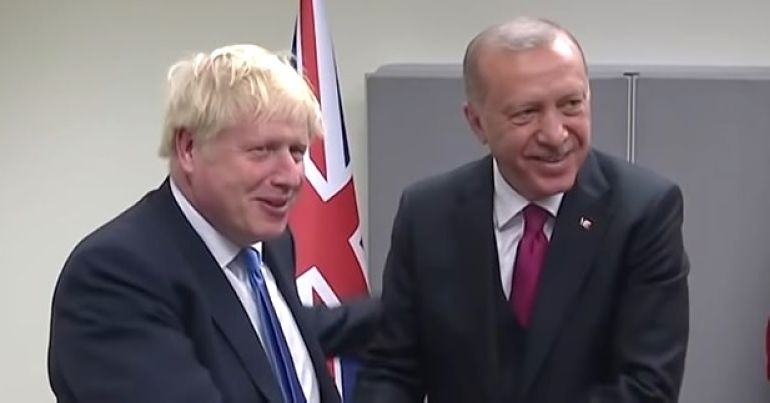 A major potential scandal just hit the UK government involving its arms sales to Turkey. The Times reported on 27 October that these arms sales have included numerous licences for phosphorus products.

As The Canary recently reported, Turkey faces accusations it used white phosphorous in its attack on the people of northern Syria (aka Rojava). International law dictates forces cannot use white phosphorus against civilians due to the catastrophic effects it has. As the BBC reported in 2005 after the US used it on Iraqis in Falluja, the substance can “burn right through flesh to the bone”.

The Times reported that, over the last two decades, UK ministers have issued over 70 licenses for “military products that can contain phosphorus” to Turkey.

Multilateral treaties allow the use of phosphorus in weaponry for certain purposes, such as creating smokescreens. NATO forces, for example, commonly use it in grenades and artillery shells. But treaties such as the Geneva Convention and the Chemical Weapons Convention forbid its use as an incendiary weapon against people.

The Times reported that Hamish de Bretton Gordon, ex-commander of the UK’s chemical, biological, radiological and nuclear regiment, said it is “almost certain” the UK sales to Turkey of phosphorus were of the “white phosphorus variety”.

We are monitoring the situation in Syria very closely when assessing export licence applications against our strict licencing criteria. We keep all our defence exports under careful and continual review.

The Organisation for the Prohibition of Chemical Weapons (OPCW) is currently looking into the potential use of chemical weapons against the Kurdish population in northern Syria. Following Kurdish officials accusing Turkey of using “unconventional weapons”, the OPCW said on 18 October that:

At that time, de Bretton-Gordon commented that white phosphorus was the “most likely culprit”. Kati Piri, the European parliament rapporteur for Turkey, also tweeted:

Turkey must be held responsible for war crimes committed against Kurdish civilians. The use of white phosphorus is not only cruel but also strictly prohibited by international law. https://t.co/6eVf4Ne5nm

The accusations against Turkey come amid its assault on the Kurdish population in northern Syria. The attack began after Donald Trump pulled US troops from Syria, where they were partnered with Kurdish-led forces. These fighters in northern Syria were instrumental in defeating Daesh (Isis/Isil). His action left people in the region at the mercy of the Turkish regime. As The Canary‘s Tom Anderson reported on 24 October:

[Turkey’s] illegal invasion has so far killed over 200 civilians, created around 300,000 displaced people, and allowed hundreds of Daesh (Isis/Isil) supporters to escape detention.

De Bretton Gordon said that, if “we had samples” of any chemical weapons used on the Kurds, it would “probably be possible” to work out where they came from, “potentially” down to the country of origin. He said he wasn’t “convinced” that Turkey had used the weapon itself, because “everybody in northeast Syria has white phosphorus”.

Time will tell. The UK government is no doubt hoping de Bretton Gordon is right to doubt Turkey’s involvement. Because if Turkey was responsible and the UK supplied it that white phosphorus, it would be a major scandal indeed.