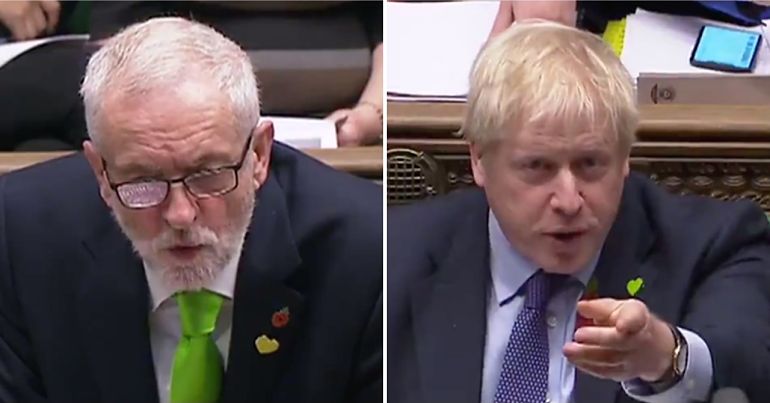 During Prime Minister’s Questions (PMQs) on 30 October, Jeremy Corbyn focused on the NHS. He questioned the PM over the government’s plans to sell off parts of the NHS to US companies; and he asked about cuts to services and waiting lists.

But Johnson’s answers were full of bluster. So it was left to Corbyn to sum the PM up in one sentence:

If in doubt, repeat a lie

how a trade deal with America might leave the NHS footing a bill for billions, meaning less money for our healthcare.

But Johnson dismissed the programme’s findings. Instead, he chose to repeat another of his discredited claims – that he is planning on building 40 new hospitals. Such funding is actually only available for six hospitals. Full Fact‘s conclusion on Johnson’s claims was clear:

In its latest announcement the government has committed the money to upgrade six hospitals by 2025. Up to 38 other hospitals have received money to plan for building work between 2025 and 2030, but not to actually begin any work.

Just as Johnson repeatedly used the ‘£350m a week to the NHS’ lie during the Leave campaign, he is likely to spout the ’40 hospitals’ claim continually during the election campaign.

But Johnson and the Conservative Party cannot be trusted with the NHS. As one doctor on Twitter pointed out:

Boris Johnson boasts about his party’s commitment to the NHS.

As an NHS doctor, I can tell you that the NHS is being wrecked by this govt. Waiting lists grow, it is difficult to recruit staff, staff are leaving, & there are currently 11,000 Drs & 40,000 nurses down.#PMQs

Labour MP Angela Rayner, meanwhile, nailed why it is so important to focus on the NHS:

The Conservative Party clearly does not care about our NHS and will happily sell it off to the highest bidder. This election is a chance to reclaim our healthcare, kick out the private companies, and stop Johnson from selling it off to Donald Trump’s mates.

Johnson will fight this with bluster and lies. So it’s down to all of us to call him out every time it happens and, in the words of Corbyn, remind the world that Johnson is “talking nonsense”.