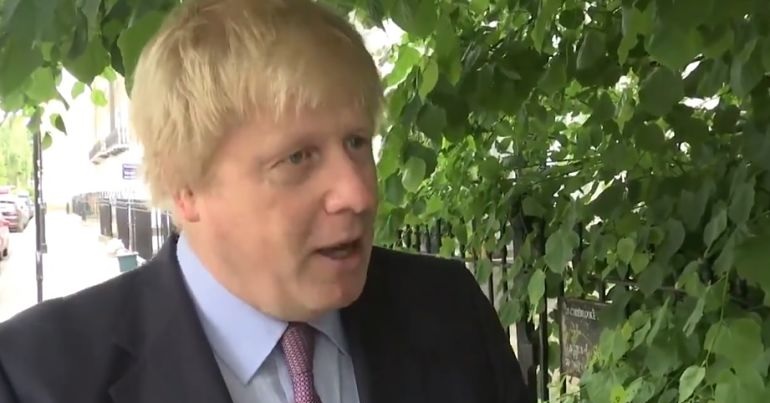 As the UK’s political parties started their election campaigns on 31 October, a damaging video of Boris Johnson resurfaced. The six-second clip from 2016 shows that the PM apparently couldn’t momentarily stop in a public space without a passer-by branding him a “disgusting racist”.

That’s not a good look for someone hoping voters will elect them as PM. At least, it shouldn’t be.

The clip is from an interview with Johnson while he was campaigning for Leave in the 2016 EU referendum:

The public know what Boris Johnson is now.

He can't venture out in public without being reminded.

Others have called Johnson racist too. Prior to Conservative Party members electing him PM in July, the SNP’s Ian Blackford called him a racist in the House of Commons, saying Johnson was “not fit” to be prime minister based on his past remarks. Such comments include Johnson writing in a Telegraph article that Muslim women who wear burqas look like “letter boxes” and ‘bank robbers’.

In a country that embraces its diversity, such behaviour would be an electoral killer. But as Rod Liddle just showed in a Spectator article, Johnson’s not the only person in Britain to actively and casually engage in racist discourse:

The latest anti-Muslim hate speech vomited up by Rod Liddle in The Spectator.

The pundit class that spends its days squinting at years-old Leftie tweets to hyperventilate over the most tangentially “antisemitic undertone” is happily back-slapping this mouth-breathing racist. pic.twitter.com/TqMuwylalr

Indeed, remember how frequent a guest Islamophobia-peddler Nigel Farage was on the BBC during his UKIP years? Not to mention the broadcaster’s interview in July with Steve Bannon; a man who described being called racist “a badge of honour”.

Many argue that such views should be aired in public so they can be challenged. But in Britain, the balance is off. There’re so many racist comments and opinions floating around in the country’s discourse that it serves as a tacit endorsement of them. It normalises them.

So much so, in fact, that one of the people who spouts them holds the position of PM.

The Axis of ‘Acceptable’ Racism

It’s a problem for all of us, though. It puts us in a situation where Donald Trump telling Boris Johnson to partner with Nigel Farage to create an “unstoppable force” is considered a legitimate comment. To be clear, that’s the US’ white supremacist-sympathiser-in-chief telling the guy who makes racist ‘funnies’ to join forces with the Islamophobia-peddler. It also creates a situation whereby the media uncritically reports the white supremacist-sympathiser-in-chief saying Jeremy Corbyn as PM would be “so bad for your country”.

Division, hatred, fear, poverty, and destruction. These things are ‘bad’ for Britain. Unity, cooperation, love, equality and prosperity most certainly are not. And essentially, voters face the choice of which of these they want as the backbone of their country this general election.