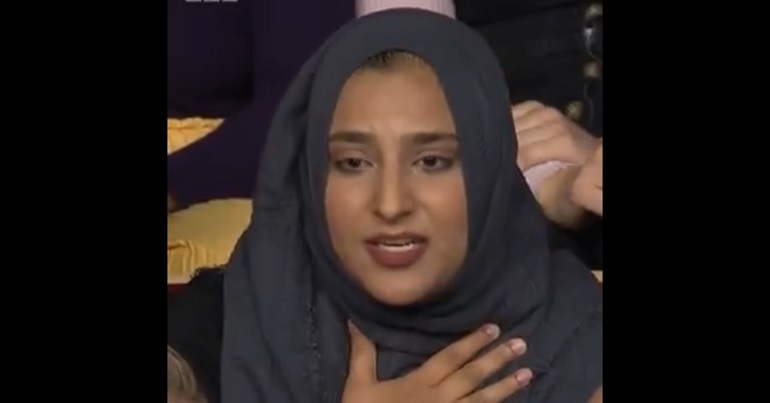 A Muslim woman and teacher who appeared on BBC Question Time on 31 October took Boris Johnson to task over his comments about burqa-wearing women.

I don’t like the fact that we are supporting a prime minister who incites hatred.

This is a Textbook definition of somebody defending the indefensible.

Boris Johnson should apologise for the inflammatory and derogatory language he has used, in the past.

Boris Johnson is not fit to be Prime Minister.. Period!

Her comments, meanwhile, point to the wider issue of the Islamophobia crisis in the Conservative Party. This issue continues to be a problem while simultaneously being ignored or underplayed by the corporate media:

We must not forget: the Conservative Party's institutional Islamophobia continues under Boris Johnson

And any discussion of Tory Islamophobia has so far been woefully absent in media coverage of the upcoming general election on 12 December:

At what point of the election cycle will we get proper coverage of the Islamophobia of the Conservative party and how Muslims are genuinely scared of another five years under Boris Johnson?

Islamophobes in the media

Not only is there no meaningful accountability for Islamophobia among Conservatives, but right-wing Islamophobic commentators are actually running rampant in the media.

On 31 October, for example, Sky News invited former UKIP leader Malcolm Pearson on as a guest commentator. Sky didn’t just give Pearson a platform, though. It also allowed him to spout conspiracy theories about Muslims completely unchallenged:

What the FUCK?! Any Muslims still want to vote for the Tories? Remember what their leader said about Muslim women. Now this racist claims a Muslim leader claims “We will take over via the womb and the ballot box.”

I call bullshit. This is horrendous. And aired on national TV. https://t.co/863BtJbAoW

I wasn’t sure about having kids, but now I’m 100% getting knocked up just to freak out this racist old duffer about the Muslim birth rate.

Prior to this, the Spectator published an article by noted Islamophobe and racist Rod Liddle. Staying true to form, Liddle mocked Muslims and expressed a desire for them to be disenfranchised:

As editor, Fraser Nelson bears ultimate responsibility for the vile racism & Islamophobia that is pouring out of the Spectator (the latest by Rod Liddle published today).

He is complicit & must not be allowed to dodge responsibility. pic.twitter.com/zizIBIprSM

Rod Liddle wishes British Muslims will not vote in the election. He wants it so bad that he hopes there is a day in the Islamic calendar when Muslims are forbidden to vote. Well there isn’t one. Personally I hope all 3.3 million Muslims in the UK turn out to vote (for any party).

The toll of normalised Islamophobia

For Muslims who would like to engage with a broad range of issues in a general election, the impact of this Islamophobia in the media is exhausting:

Muslims should be wondering about the economy and Brexit and education and employment and health (beyond discrimination in these sectors) yet so many of us are having to put all energy into raising unchecked Islamophobia in our f****** ruling classes on daytime TV, what a joke

And even his platform isn't *that* surprising to me. It's frustrating that ppl want us to repeat cycles of shock and horror instead of confronting our current reality. Rampant Islamophobia is not exclusive to a right-wing minority. https://t.co/gZg6JubTLz

Rather than challenging Islamophobia with the same energy that antisemitism is rightly challenged, the media seems to be actively contributing to it. Moreover, mainstream media continues to brush past the institutional Islamophobia in the Conservative Party and its impact on Muslims:

You can’t have Baroness Warsi come on to do a 5min segment then the next day have Melanie Phillips or Rod Liddle as guests. Feels like with all due respect to Baroness Warsi and her tireless work on Islamophobia ,we are in a holding pattern of one article/segment and move on.

Maybe, at some point, minorities will stop being cannon fodder for right-wing election campaigns. But we don’t appear to be there yet.