This footage of an incoherent, rambling Boris Johnson could lose him the election - Canary 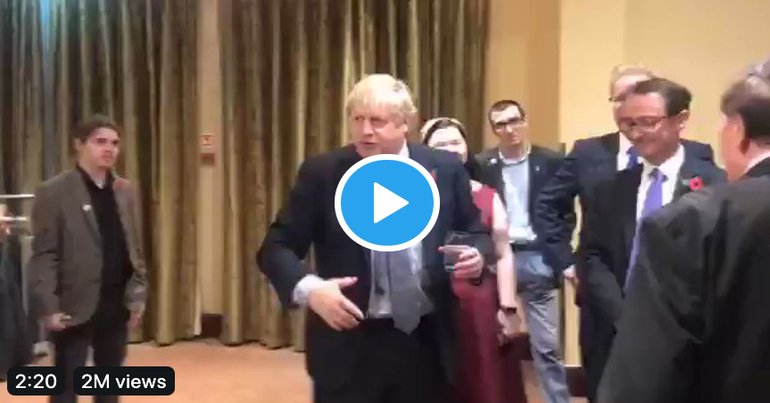 Footage of an incoherent, rambling Boris Johnson at a campaign event has been viewed over 2 million times on social media. And it might just lose him the upcoming general election. Goodness knows, elections have been lost over far less than this.

The prime minister was speaking at the Northern Ireland Conservatives’ meeting on 7 November. The atmosphere should be electric. But the behaviour of Boris Johnson is so bizarre, the bystanders look visibly uncomfortable and attempt to avoid eye contact. Perhaps they’re hoping if they look away long enough, he’ll go away.

Most of the video (limited you 140 seconds) now uploaded pic.twitter.com/3VjJHu2CZJ

Johnson is attempting to explain the impact his Brexit deal will have on Northern Ireland. I say attempting, because it’s clear that even he doesn’t understand what on earth he’s talking about. He gesticulates wildly, and takes long pauses as he struggles to remember what a trade tariff is (a tax on goods crossing national borders). And then he seems to almost forget he’s talking about the UK and Ireland. To take just one highlight (ellipses used to indicate pauses):

So when you come out of the, of the EU Customs Union which is what we’ve done…you have to have some way…of checking…that goods…that might be…attract a tariff going from the United Kingdom…into…Ireland…pay that tariff. If there is to be a tariff.

And the only place you can do it, if you don’t do it at the border…is…at the border in Northern Ireland. Most..the…the…there will not not be tariffs or checks on goods coming from GB to NI that are not going on to…Ireland. That’s the whole point.

The footage has to be seen to be believed. Johnson is unable to explain his own Brexit deal to an audience of Conservative supporters. And he’s also unable to even pretend he has a handle on it. Once it began to circulate on social media, there was no stopping it:

I regret to inform you all that this gelatinous, blathering nincompoop is our prime minister.

But if enough people watch this, he won’t be after December 12.

Boris Johnson is the (barely) sentient personification of the crisis of the British state pic.twitter.com/bxIBbbq91B

And it later broke into the mainstream media. Chiefly because it shows that a) Johnson does not understand the ramifications of his own Brexit deal, and b) his botched explanation directly contradicts his own Home Office and Brexit secretary. Asked if trade between Northern Ireland and Great Britain will be subject to customs declarations, Johnson replied:

You will absolutely not. And if somebody asks you to do that, tell them to ring up the prime minister, and I will direct them to throw that form in the bin.

The problem is, according to his deal, they absolutely will. Tossing the form in the bin won’t make that fact go away.

As I reported yesterday, that is contrary to what his government ministers have said, wisy HMRC has said what is in the NI protocol he has negotiated with the EU.

In an interview with Sky News, shadow Brexit secretary Keir Starmer called the PM out for his reckless statements, saying:

This is a prime minister who either doesn’t know the details of the deal that he has negotiated, or isn’t being straight about it. Or probably both.

NEW: "He's making it up as he goes along"

Labour had a narrow lead in the polls until the last moments of the 1992 election, when Neil Kinnock gave his infamous “We’re all right!” shout. That one moment is said to have lost Labour the election. Three triumphalist words.

With Johnson, we have something far worse. A prime minister unable to remember his own flagship policy, or so dishonest as to wilfully misrepresent it.

The entire world has watched on in horror as a babbling narcissist reduces US politics to a global joke. What Boris Johnson’s recent performances show is if we elect this charmless clown on 12 December, the UK faces the same fate.