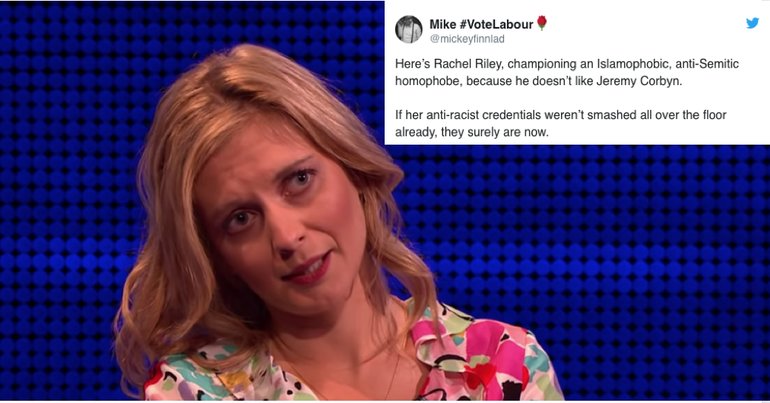 Rachel Riley does the numbers on Countdown. But she’s also appointed herself witchfinder general in a campaign to silence critics of Apartheid Israel with false accusations of antisemitism. (Full disclosure: she has dedicated a lot of that time smearing The Canary.) This is why we were somewhat shocked to find her promoting the views of an alleged antisemite. Why? Because he happened to heckle Labour leader Jeremy Corbyn.

On 13 November, Scottish church minister Richard Cameron heckled Jeremy Corbyn, smearing him as a “terrorist sympathiser”. And immediately, Corbyn’s political opponents began to celebrate. The right-wing Evening Standard, Scottish Sun, and Express newspapers launched attacks on Corbyn on the back of the heckle: 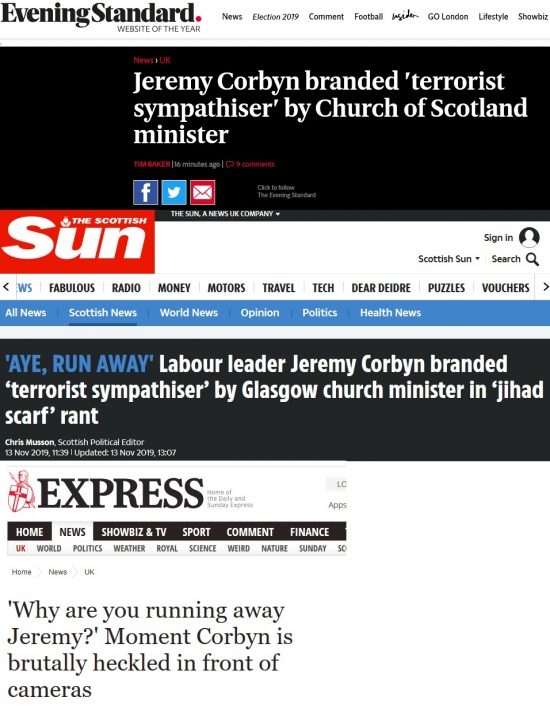 But the enthusiastic attack was short lived. Because a brief examination of Cameron’s social media activity revealed a hard-right bigot who has frequently shared racist and homophobic views:

So it appears that Richard Cameron – the Church of Scotland minister who heckled Jeremy Corbyn – has a serious problem with Muslims and LGBT people. Just a snapshot of his tweets below. pic.twitter.com/yBkxht2rwa

He also faced allegations of antisemitism:

It turns out that Richard Cameron is a rampant antisemite, too.

Well done to those in the British media who platformed this homophobic, racist troll, I hope you are extremely proud indeed. pic.twitter.com/u7eI1rDsQq

Riley and her fellow anti-left trolls regularly trawl the social media history of Corbyn supporters, making eye-wateringly tenuous claims of antisemitism. They screenshot each others’ outraged tweets and fire them at advertisers in efforts to shut down left-wing publications. They rarely, if ever, present evidence to back up these claims. That’s how witch hunts work.

Far-right/far-left, hate is hate and lies are lies, any advertisers reading this or anyone who works for an org that advertises online, please make sure these fake news sites are all blocked from your ad preferences 🙏🚫🧟‍♂️ https://t.co/x6treZ4Cdd

And yet, with the guy who heckled Corbyn, even the most rudimentary background check was seemingly deemed unnecessary. Below is Riley’s tweet, and a sample tweet from Cameron’s timeline showing his views: 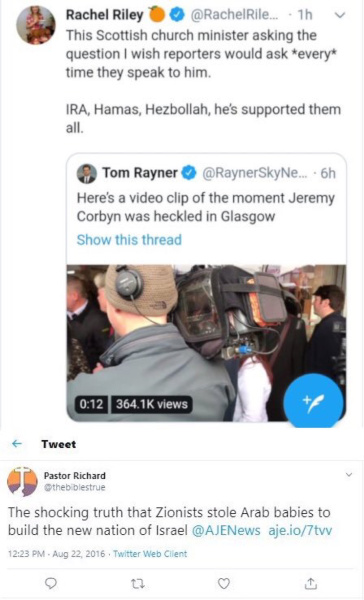 People were quick to inform Riley of her mistake:

If her anti-racist credentials weren’t smashed all over the floor already, they surely are now. pic.twitter.com/sBwWukvQd6

Can someone ask Rachel Riley too. https://t.co/8ZkbAWNkeB

I'm no fan of Williamson but when has he said anything antisemitic, Islamophobic or homophobic like this reverend has *repeatedly*? If you think retweeting = guilt then what of Gnasher Jew and Rachel Riley supporting Cameron *after* he made the 'Islamic jihad headscarf' comment? pic.twitter.com/g9aAMP4OHz

Despite all this, Riley’s tweet remains undeleted at the time of writing, and she even doubled down by suggesting Cameron’s controversial previous comments ‘changed nothing’:

My thread of the numerous times JC has supported/praised terrorists/invited them to Parliament.

The heckler turning out to be a massive wrongun changes none of this.

Corbyn cheerleaders trying to dismiss the facts because of it is one of the worst ‘woke gotchas’ they’ve tried. https://t.co/nXx1V5ePXu

It’s not even the first time (in the last week), however, that Riley has failed to perform basic due diligence before promoting a smear against Labour. Just days before, Guardian columnist Jonathan Freedland confused two Muslim men in efforts to smear a Labour candidate as an antisemite.

Labour tell me that earlier reports of a candidate shortlisted in Birmingham Hall Green rested on a confusion about two men with the same name. The Majid Mahmood shortlisted for the seat is NOT the Majid Mahmood fined over comments on Facebook – and I’ve deleted those tweets

But Riley was already on the case, promoting the smear regardless. 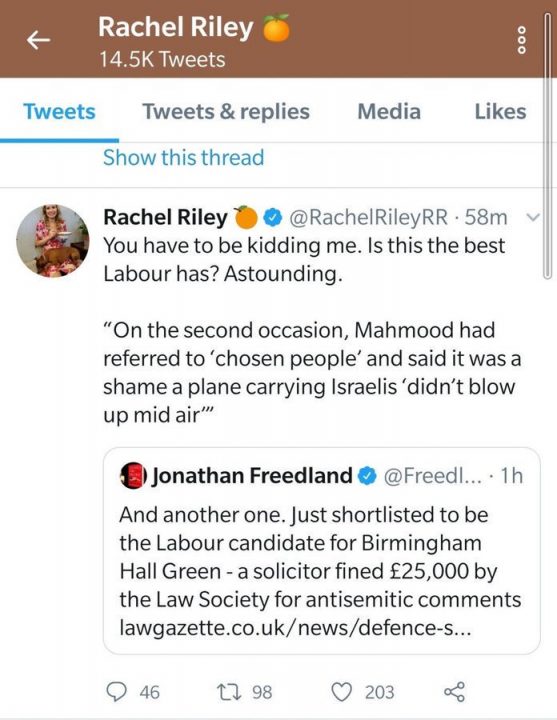 What would Rachel Riley do?

This behaviour should be shocking to anyone still believing that Riley’s behaviour was ever about antisemitism. But the disgraceful way Jewish critics of Israel have been treated by this toxic campaign should have raised eyebrows far earlier.

If a person on the left had promoted Cameron for any reason, Riley would most likely already be leading the Twitter pile-on. And so, for the sake of consistency, the questions must be asked:

Should Riley face sanctions for sharing the views of a racist homophobe?

Should Riley be removed from her job?

Should Riley be condemned publicly by every genuinely anti-racist person?

Should anyone who associates with Riley be condemned as a racist homophobe by association?

According to the established logic of Rachel Riley, the answer to all of the above would probably be ‘yes’.