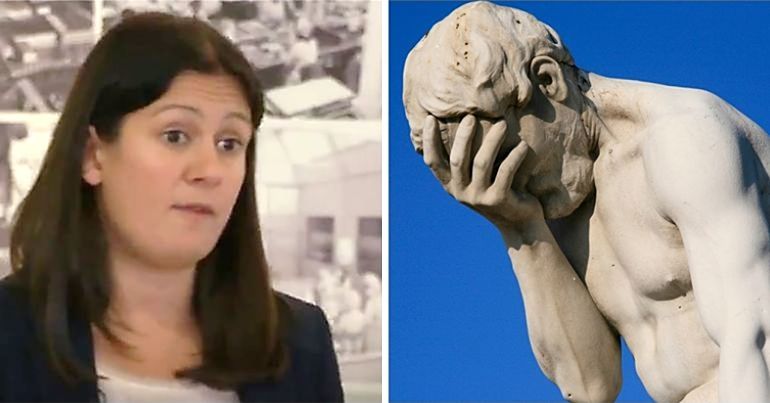 During a downbeat and confusing leadership campaign speech, Lisa Nandy asked Labour members to “take the brave, not the easy choice” and support her leadership bid:

"If we do not change course as a Labour movement, we will die and we will deserve to."

Labour leadership candidate, Lisa Nandy, says "now is not the time to steady the ship and play it safe". pic.twitter.com/MkzTJ21WZM

But not only did Nandy show a lack of presentation skills in her delivery, her content showed a lack of vision. She called for the Labour movement to “change course”, thereby turning her back on the good that was achieved under Corbyn’s leadership.

This isn’t leadership. This is pessimism. It’s trashing ourselves to embed a narrative. It’s depressing. Even I’m considering leaving after hearing this doom, gloom and despair! https://t.co/OtKwjBig8x

There’s no denying the magnitude of Labour’s defeat on 12 December 2019. But that doesn’t necessarily mean the course was wrong. In fact, research suggested Labour’s election manifesto was popular with voters:

Jeremy Corbyn was the victim of a vicious smear campaign from long before the election campaign had even begun. And Brexit ultimately dominated the entire election. Despite losing such a large number of seats, Labour’s vote was higher than Tony Blair’s electoral victory in 2005.

This is scant consolation when Labour lost so many seats, but it does support the case for maintaining course. Also Nandy is wrong to dismiss the last few years as “bruising”. Corbyn turned Labour’s fortunes around in 2017 by winning 30 more seats than his predecessor Ed Miliband. He also secured the largest vote share increase by a Labour leader since 1945.

So it’s unclear why Nandy adopted this publicly humiliating style of speech. But it appears to be in line with other Labour leadership candidates as they turn their backs on what Corbyn built.

And it’s difficult to see how she felt this style of speech would rouse the party faithful to get behind her. She pressured Labour supporters to change, saying that unless that happens, “we will die, and we will deserve to”. This comment deflated some online:

Not content with starting on a negative point in a possible attempt to shock people into action, Nandy continued. But it wasn’t quite clear what she meant when she said “we’re a movement that has always pointed north, south, east, and west”. So one person online responded:

And as it went on, not only did it get more downbeat, but it seemed to confuse people:

Labour is in retreat. We’ve been defeated and divided in Scotland. We’ve been beaten back in the towns of north Wales, in the north, in the south, and in the midlands. And we’re in the fight of our lives in some of those toughest seats in our major cities as well.

To be honest, it raised more questions about her suitability as leader than it did about the course the Labour movement was on. And the ambiguity with which she delivered her speech was clearly noted:

But it wasn’t entirely hopeless

In fairness, she did get one thing right. She said:

So now is the moment to up our game and recover our sense of ambition.

That’s perfectly true. Because if Labour wants to be a party that represents ordinary working people and creates a fairer society, it needs to build on the hard work that is already complete. Now is not the moment to throw that away.