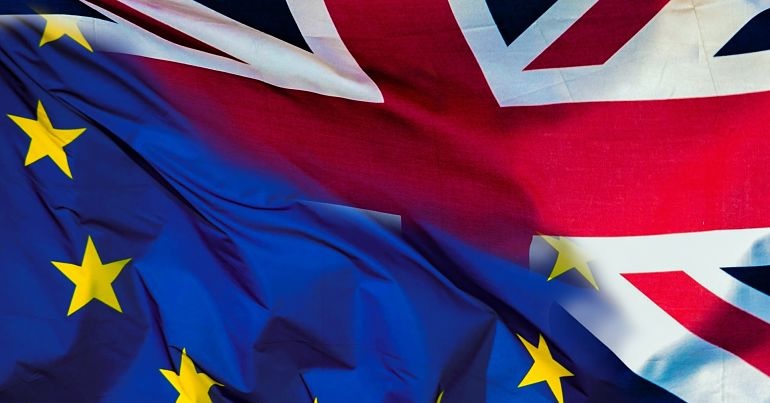 Ask people from other countries what the British are like and usually the word ‘polite’ will come up at some point. We’re known for our good manners, even in situations where we’re actually being quite rude.

But none of that etiquette was on display on 30 January, our so-called ‘Brexit Eve’. At least, it wasn’t on this side of the channel.

So what went down in Blighty to mark the special occasion? Well, prime minister Boris Johnson invited US secretary of state Mike Pompeo to Downing Street, symbolising that the EU-free UK is quickly running into the far-right embrace of the US. Meanwhile, Pompeo made clear that chlorinated chicken will be a deciding factor in whether the US will grant the UK an even closer ‘special relationship’ in the future.

Then there was Nigel Farage, unveiling a portrait of… wait for it… Nigel Farage, to mark the special day. And as if that wasn’t bad enough, Farage brought Jim Davidson along to the unveiling, a man known for his racist and homophobic jokes.

Nigel Farage has just unveiled a portrait of himself entitled "Mr Brexit". Jim Davidson is now giving a speech to mark the occasion. Happy Brexit everyone pic.twitter.com/dCDnfqywwt

That followed Farage’s farewell speech in the European Parliament on 29 January where he spoke of his “hate” for the EU and shared his wish for the “project” to fail. Then Brexit Party MEPs all pulled out tiny British flags to wave in the face of representatives from other EU countries.

Mairead McGuinness cuts Nigel Farage's mic – "Sit down, put your flags away – you're leaving – & take them with you – goodbye" 👍 pic.twitter.com/XM1hztMelA

This ill-willed offering stood in stark contrast to the farewell offered by others in the parliament, who joined in chorus for a rendition of Auld Lang Syne:

Singing of Auld Lang Syne starts in the European Parliament as the Brexit Withdrawal Agreement is approved by MEPshttps://t.co/tzNNPSGZXc pic.twitter.com/pTiLrW0Qlf

Brussels went in a different, much more polite, direction on the eve of Brexit, too. The Belgian capital laid on what the Independent described as a “festival of Britishness”. That festival involved the authorities lighting up the city’s central square in Union Jack colours and playing British music. People also dressed up as Sherlock Holmes and Dr Watson. Meanwhile, a London black cab was brought in to complete the scene. Red phone boxes and redcoats, you name it, Brussels had it. Meanwhile, banners in the square read “Brussels Calling: Come together, right now”.

Brussels has lit up its main square in Union Jack colours to say goodbye to the Brits 😭 pic.twitter.com/oPU4bX7YYO

Brussels is putting on a festival of Britishness to say goodbye to the UK ahead of Brexit. The Grand Place is lit up in Union Jack colours while bands play British music. Even Manneken Pis is dressed up for the occasion.#BrexitEve pic.twitter.com/AlUxyqNDKN

At this historic moment for the United Kingdom, the City of Brussels recalls the long friendship between the people of Brussels and the British

Thanks for having us?

I raise none of these examples to argue a Remain or Leave position. There were, of course, a number of reasons why people chose to leave – Brussels forcing an anti-democratic, capitalism-at-all-costs agenda on some of its member states among them. Equally, there were many reasons to want to remain and reform the EU.

But the day before Brexit brought out the good, the bad and the ugly in involved parties. Continuing EU members largely exhibited the former, while a number of the soon to be ex-EU members, i.e. the British, shamed us with the latter. And with a Leave means Leave campaign rally going ahead on 31 January – headed by the Brexit Party’s Richard Tice – it’s unlikely the big event will be marked by any humility or graciousness either.

So much for British politeness.