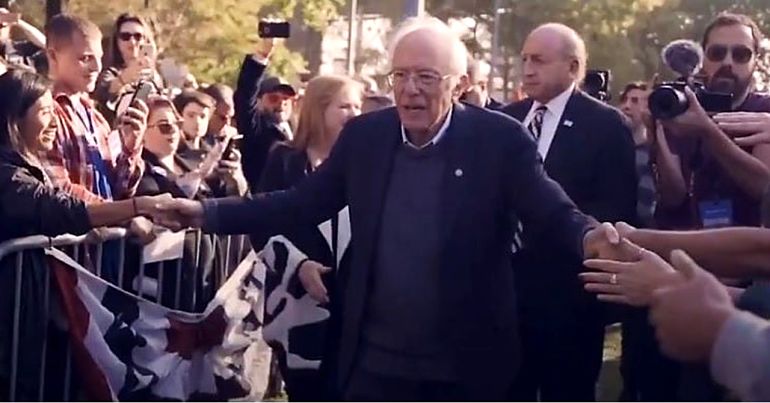 A new video has been released in support of presidential hopeful Bernie Sanders. The spine-tingling two minute clip, featuring a speech by rapper and activist Killer Mike, focuses on what binds together the people Sanders is offering to represent.

In short, it’s an electrifying statement on why people – of all colours, genders, and sexualities – should march the Vermont senator straight to the White House.

It is hard to overstate the power of this @KillerMike speech: it widens the scope and imperative of solidarity, it articulates a theory of change, and it clarifies the urgency pic.twitter.com/qUSHCM3Sur

“Neighbour, the time is now”

The video, made by GoodNightProductions, features Killer Mike recalling the words of writer James Baldwin at an event with Sanders. The activist says:

Baldwin wrote of racial segregation in the US and of the hostility towards people of colour in its aftermath. Killer Mike said Baldwin’s words “resonated” with him as a youngster. He continued:

as I grew, I started to understand: poor white people have been denied. Women are being denied. Gays and lesbians, transgender people been denied. Immigrant children been denied. Everybody outside of that one per cent has been denied.

After reminding people of how they are united, Killer Mike then invites them to rise up together:

Look to your neighbour and say, ‘Neighbour, the time is now. There are more of us. We’re stronger. We will wait no longer’.

Killer Mike’s message was one of togetherness, urgency, strength, and hope. His rallying cry concluded with him declaring that Sanders will be the next president of the United States.

Unite in the fight

The video went down a storm:

No way Biden’s or Warren’s or any one of the other campaigns, has the power to move people like this one does… Just damn. The time is NOW. #Bernie2020✊🏽🔥

I’m bawling. This is the movement I’ve spent my entire life wishing to be a part of.

Whenever I see this video, I think the same thing: We were born for this fight.

Omg this 60-year-old Chicana hasn’t been inspired for a while. I’m in!!

It’s not hard to see why the video is touching a nerve. It’s a powerful call to unity in a world where people are encouraged to be divided along ethnic, gender, and other lines. It also points to who benefits from people turning against each other, namely the only ones who haven’t “been denied”: the 1%.

Moreover, the video energises people to take action, together, immediately, by backing the presidential candidate who’s putting their rights, freedoms, equality, and liberty at the centre of his campaign. Sanders is also the candidate who’s promising to take on the true oppressor of the people: the 1%, as he explained during a recent event:

The time really is now

People in the US have the opportunity to turn Killer Mike’s words into deeds right now. Democrats started to vote for their preferred candidate to face Donald Trump at the 2020 presidential election in the Iowa caucus on 3 February. As voters headed to the polls, RAICES, a Texas-based advocacy group for immigrant and refugee rights, made sure the unity Killer Mike spoke of was at the forefront of their minds:

Wow. Twelve chain-link cages, symbolizing immigrant children in detention across the country, have been installed outside of #IowaCaucus sites this morning.

The time really is now for people in the US. Let’s hope they seize it together.