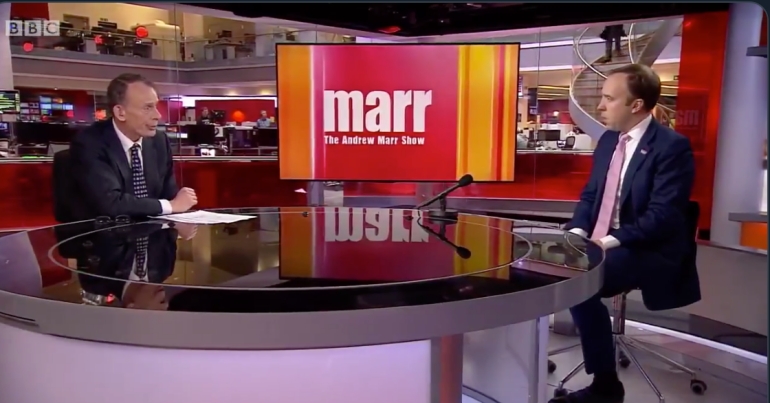 Health secretary Matt Hancock appeared on The Andrew Marr Show on 5 April. He warned that unless people follow the rules on essential travel and social distancing then tougher restrictions would be introduced. Hancock stated that:

I don’t want to have to take away exercise as a reason to leave home… if too many people are not following the rules.

If you don’t want us to take the next step and ban exercise… then the message is very clear… you have to follow the rules.

But while every single one of us has a responsibility to stay at home and stop the spread of coronavirus (Covid-19), people on social media were quick to highlight that Hancock is trying to blame ordinary people instead of the government for the spread of the pandemic.

Many people highlighted the fact that the spread of the virus is far more likely to happen from people still forced to work in jobs such as construction and call centres:

People shouldn’t be doing stuff like this obviously but Hancock threatening to ban us all in completely coz of a few of these, then letting hundreds of thousands go to work on sites tomorrow doesn’t make much sense to me. https://t.co/8Zw3B0FG7u

There is massive campaign by the government, police, and media to blame people going to parks and staying 2 metres apart for spreading coronavirus while people are being forced to work in call centres.https://t.co/PRaszZB5DG

Others pointed out the class distinctions in enforcing the lockdown:

#coronavirus lockdown highlights the significance of class & deprivation in a national emergency. Being told not to go out is one thing if you have plenty of indoor space and a garden. It's very different if you live in cramped accommodation – & possibly with an abusive partner.

This was a point Labour’s deputy leader Angela Rayner also made. Rayner stated:

It’s alright for people who have got big houses and huge back gardens to say that.

But actually if you’re stuck in inadequate accommodation, you’ve got no back garden, you’ve got nowhere to go and you’re all on top of each other, quite literally, then I think people should do social distancing and should keep their distance but also be reasonable and proportionate about that.

we also have people with holiday homes sharing advice with each other to travel at night to avoid the police, and even those who don’t care if they’re fined –  they’ve set out and want to arrive.

Even Scotland’s chief medical officer Catherine Calderwood didn’t think the rules applied to her. Calderwood was given a police warning after she was caught out visiting her second home:

BREAKING: Scotland's chief medical officer has been given a warning about her future conduct by police after she visited her second home in Fife https://t.co/yAVDexUbiA

Blame the government, not the people

While we all have a responsibility to stay at home and limit the spread of coronavirus, it’s important that we blame the right people for the spread of the virus. And that blame has to lie with the government.

UK policy and the government’s plans have been as clear as mud. First, Boris Johnson downplayed the virus; then there was herd immunity; followed by lockdown. And now, as the death toll tragically rises, it’s not going to be the people out sunbathing this weekend who are causing the spread, but government inaction weeks ago:

They‘re blaming the public because they screwed up. Hospital admissions & deaths now are a result of infection 3 weeks ago, around the time Cheltenham festival, football matches & other public events carried on as normal. Remember we were told they wouldn’t affect infection rates

Undoubtedly, there are irresponsible people out there ignoring the fact we’re facing a pandemic. And none of us should be looking for loopholes or excuses to break the lockdown.

But Hancock’s threat to use stricter measures to limit the spread is a smokescreen to hide government failures over the pandemic. Luckily, social media users are making sure he isn’t allowed to get away with it.