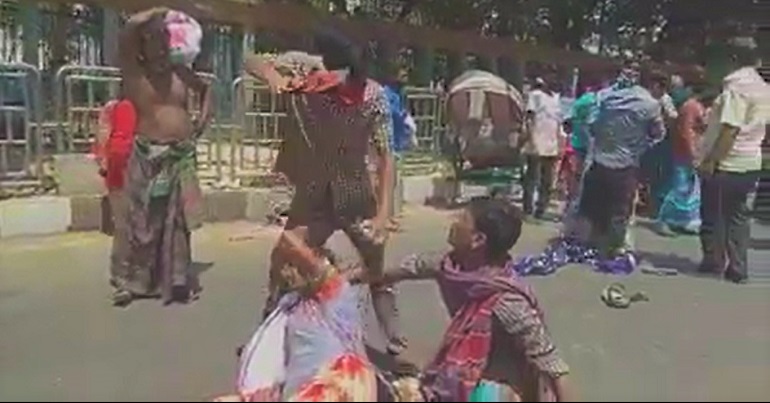 On the face of it, Bangladesh appears not to have been hit hard by the new coronavirus (Covid-19). Official statistics show that 88 people have tested positive for it. That’s well below the numbers in places like Europe, China and South Korea.

But below the surface, coronavirus is having a devastating impact on people’s lives in Bangladesh. A new video – taken on April 2, appears to show people fighting over food.

The video was passed to The Canary by anti-sweatshop group No Sweat. According to No Sweat, the video shows a volunteer group giving out food parcels and people fighting to take them.

This video heightens fears that Bangladesh could be hit by food shortages as the coronavirus crisis continues. Reports suggest that such shortages are already hitting the country.

The Inter Press Service has claimed that there could be:

It went on to argue that Bangladeshi workers are:

hit with loss of income like no other in the face of COVID-19 crisis.

And it also suggested that people are already facing shortages of food, with many people:

in a difficult financial position as they face shortages of food and daily necessities.

This comes following the government’s move to shut down offices, workplaces and the transport network on March 26.

But it isn’t just the government’s shutdown of parts of the economy that is impacting people. Around 11% of Bangladesh’s GDP comes from garment manufacturing. Garments also make up 84% of the country’s exports. This means that the economy is heavily reliant on international buyers of clothing. When orders are coming in, Bangladesh’s economy benefits. When they don’t, it struggles.

And right now, they aren’t coming in. A report from the Guardian alleges that European clothing brands recently cancelled orders with Bangladesh worth £2.4bn. The report also claimed that more than a million Bangladeshi workers have since lost their jobs or been sent home without pay. These orders have been cancelled as a result of reduced demand due to the coronavirus crisis.

Matalan and Primark are among the retailers the Guardian alleges have cancelled orders. In doing so, these brands are attempting to desperately protect their bottom line and their profits while selling workers down the river.

Brands including H&M claim they will continue to pay for the orders they have already placed. But it and other major companies appear to also be chasing profits at a time of public health emergency. H&M has faced strong criticism for forcing its UK workers to continue working during the coronavirus crisis. And retailer ASOS has been accused of treating its workers in the UK “like rats”.

The impact of this sudden shift in the industry on Bangladesh has been huge. Labour rights group the Worker Rights Consortium surveyed over 300 garment factories in Bangladesh to understand what’s happening on the ground. These factories are known to supply European clothing brands.

About 6% of factories have had all orders canceled due to the outbreak, while nearly 46% said they have lost a big share of their orders.

To make matters worse, it also appears that European clothing brands are refusing to compensate workers. The Worker Rights Consortium claimed of its survey:

It found nearly all buyers refused to contribute to wages for those workers, and more than 70% of those furloughed were sent home without pay. Of the workers who were fired, less than 20% were given severance pay

No Sweat organiser Jay Kerr has argued that this kind of behaviour “exposes the truth” behind the garment industry. In an article for Bright Green, Kerr wrote:

The reaction of these brands to this crisis exposes the truth of the lofty claims they have cultivated about their sustainability. They are taking no action to protect the livelihoods of the least well-off in their supply chains, fighting instead to save every penny by canceling production contracts on a mass scale.

But the grim picture of the country’s garment sector is only part of the story. A workers’ co-op in Bangladesh is showing that when workers come together they can improve their own lives and also work towards social good.

Oporajeo is a worker-owned factory producing clothing, and it’s also No Sweat’s supplier. In response to the coronavirus, the factory furloughed its workers on full pay. It also set up a fund to ensure they are paid for the next three months.

Meanwhile, the factory has switched its production from garments to medical masks and aprons. No Sweat told The Canary that production is being managed by a team of 12 staff. These staff are working on a voluntary basis and maintaining social distancing at the factory. According to No Sweat, as of April 2, 400 personal protective equipment suits had been produced. These have then been donated to the healthcare system.

Alongside this shift in production, Oporajeo is taking other steps to support workers during the pandemic. It has set up a rationing facility for workers and the local community, so people can still access food in the event of shortages. And it’s running an emergency call centre for workers to access support and information during the crisis.

In solidarity with its supplier, No Sweat has issued a call for donations to its Garment Workers’ Solidarity Fund to support its emergency response efforts. In little more than a week, No Sweat claim it’s already raised over £1,000.