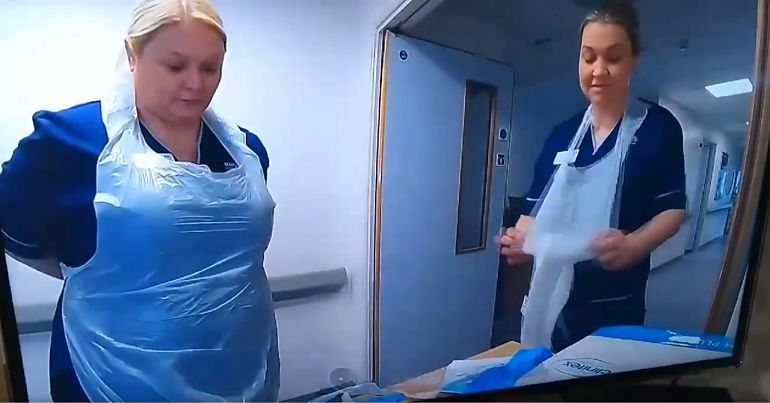 The UK government stands accused of pursuing an ‘England-first’ approach to the supply of personal protective equipment (PPE) for care workers. Senior figures in Scotland and Wales have highlighted the problem. And despite denials from the government in Westminster, the evidence appears to show suppliers having to turn down orders from outside England.

Responding to chancellor Rishi Sunak’s first budget on 11 March, former opposition leader Jeremy Corbyn said the social care sector has suffered “an £8 billion funding gap since 2010”. Sunak made no mention at all of social care despite the government having promised it £1bn a year in its Queen’s Speech.

Since then, it’s emerged that official government figures relating to the coronavirus (Covid-19) pandemic were only including deaths in hospitals. Cases and deaths in care homes weren’t included. This led to claims that the government was “airbrushing out” deaths in the social care system.

Social care leaders have also described the challenge of obtaining adequate PPE for staff. National Care Association chair Nadra Ahmed claimed PPE prices were rising to “unsustainable” levels and that social care providers were still having to pay VAT, although for NHS providers VAT had been removed from PPE.

Under these already challenging conditions, both politicians and social care providers have reported a further difficulty in obtaining PPE. Reports from Scotland and Wales claim PPE suppliers are prioritising England, even to the extent of refusing to deliver elsewhere. During the daily government briefing on 14 April, Sunak said: “There’s no truth in those stories, that those companies had been told to prioritise PPE equipment. Rather, the contrary is actually happening”.

However, both BBC Scotland’s David Henderson and Plaid Cymru leader Adam Price have offered evidence to support the claims:

UK Govt says Public Health England didn't 'gazump' Wales on tests and isn't blocking Welsh care homes from buying PPE. Yet this is the message you see right now if you try and buy face masks from the UK's main supplier. Someone is not being straight with us. pic.twitter.com/QiTOrZnRyR

ITV News also reported on the evidence on 15 April. It noted that the Department of Health and Social Care’s (DOHSC) PPE plan speaks of wholesalers providing “supplies to care providers registered with the Care Quality Commission [CQC]”. However, the CQC only covers England. DOHSC makes no mention of, for example, the Care Inspectorate Wales. The report repeats the UK government’s insistence that “Public Health England is sourcing PPE for the whole UK”.

Price remains unconvinced and has lodged a complaint with the European Commission:

I have lodged a formal complaint to the European Commission relating to instructions reportedly issued by Public Health England to the main domestic suppliers of PPE in the UK not to sell certain high-demand items to care homes outside of England.https://t.co/CZmNiOefgA

The Westminster government clearly faces many challenges at the moment. This is one that ties together its seemingly chaotic approach to the pandemic, its historic neglect of social care, and its apparent inability to consider parts of the UK that aren’t England.