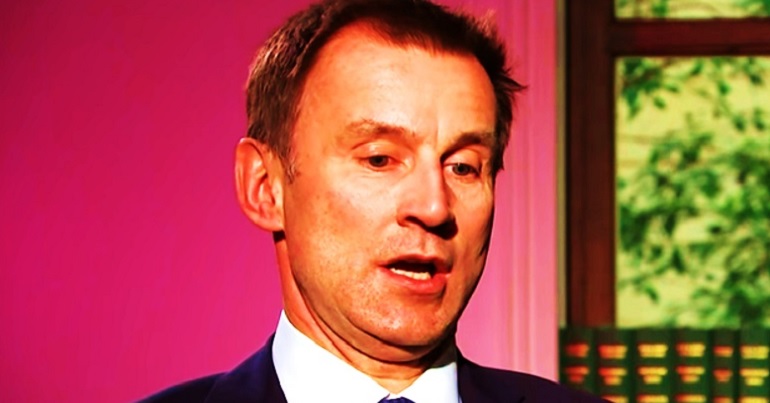 Former health secretary Jeremy Hunt has been all over the news during the coronavirus (Covid-19) pandemic. The media has been treating him as some sort of prophet over the virus. Probably because he now chairs the health select committee. But one tweet has given an important reminder of the hypocrisy of Hunt’s words during this crisis.

Hunt has been wheeling himself out to any media organisation that will listen. Most recently, he told LBC that the UK should do coronavirus testing where:

He’s also been somewhat critical of Boris Johnson’s government’s response. The Canary reported in March, that Hunt called the PM’s plan (or lack thereof) for dealing with coronavirus “surprising and concerning”. It would almost appear that the former NHS boss has an iota of concern over the health of the nation. But don’t be fooled. Because ‘Saint Hunt of Surrey’ is actually partly responsible for the huge crisis the NHS is currently in. And someone on Twitter summed it up perfectly.

Many people will be aware of captain Tom Moore. He’s been walking lengths of his garden to raise money for the NHS. At the time of publication, Moore had raised over £25m. So, as Rachael Swindon tweeted:

The wonderful Captain Tom Moore has now made an incredible £23 million for the NHS, and that’s £2 million more than the £21 million Jeremy Hunt spent on consultants to help him find £26 billion worth of cuts to your NHS.

Yes, it’s true. As Nursing in Practice reported, Hunt was health secretary when the NHS paid £21m for consultants to tell it how to save billions; £26bn according to the Mirror. As the head of the Royal College of Nursing (RCN) said at the time:

The Government will struggle to justify this level of spending on management consultants who advise on cutting nursing staff.

This sort of expertise should already be held within the NHS. It is a false economy when the consultants cost more than the savings they identify.

Now, with an NHS that’s running out of personal protective equipment (PPE), having to beg retired staff to come back, and hospitals declaring critical incidents, the fall out from years of Tory neglect is clear for all to see. Central to this has been Hunt. Yet he, and the media interviewing him, seem to have forgotten that fact.

For example, people seem to have forgotten that Hunt was in charge when the NHS did a pandemic ‘drill’. Called Exercise Cygnus, the results showed the government that the NHS wouldn’t cope with something like coronavirus. Yet Hunt and the rest of the government’s health team ignored it. Also, NHS budgets rose in real terms by just 1.4% per year between 2009/10 and 2018/19, when historically (prior to Conservative-led governments) they went up by around 3.7%, on average. Hunt oversaw most of these meagre rises.

Meanwhile, there was a 2 percentage point increase in spending on private companies in the NHS between 2011/12 and 2018/19. Waiting times have been getting worse, staff shortages have been dire, and health inequality has been on the rise.

Yet somehow, Hunt has managed to absolve himself of responsibility for the mess the NHS is in during the coronavirus pandemic. And our media has allowed him to. So, it’s left to people like Swindon to point out the steaming hypocrisy in his mealy-mouthed words.