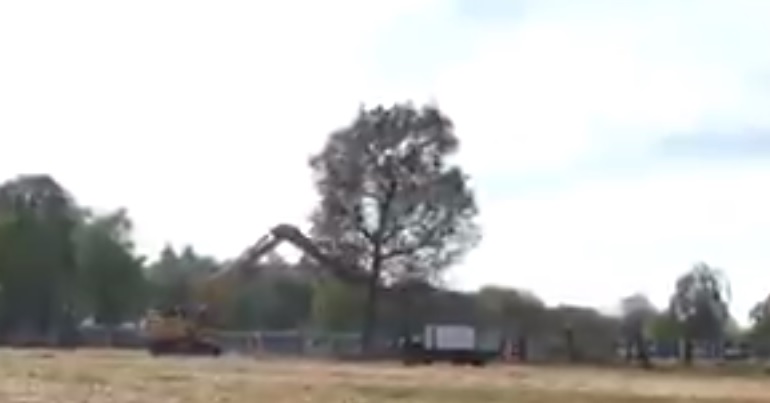 Construction for HS2 – a high-speed railway that is expected to widely serve wealthy travellers despite its extortionate cost being footed by the taxpayer – is underway. To many, the idea of forging ahead with a highly environmentally-damaging bullet-train project amid a climate crisis – not to mention a global pandemic – is highly irresponsible and reckless.

It can be hard to viscerally understand the ramifications of the project. But one 30-second video is making the impact brutally clear. And it should put both HS2 and the Conservative government, which approved the project’s continuation, to shame.

“It’s lived longer than I ever will”

On 24 April, someone posted a video they said was of the destruction of a tree in Crackley Wood, where HS2 is currently clearing woodland:

Someone on here once told me how their dad went to watch an oak being felled. One of the fellers asked why & he said "It's lived longer than I ever will. The least it deserves is my respect." I've never forgotten it. This was Crackley Wood yesterday #HS2 #ClimateEmergency #nature pic.twitter.com/xdZSN5wdSu

Alongside the video, they shared an anecdote. It described someone attending an oak tree felling and explaining why they felt the need to do so. The person said:

It’s lived longer than I ever will. The least it deserves is my respect.

This statement sums up the short video perfectly. Because watching that ancient tree keel over and hit the ground so violently that it shoots up a massive cloud of dirt and dust is like observing a death. It’s heart-breaking, as many people felt after watching it:

All that life destroyed because of mankind 😡😡😡

I can’t watch..it’s a death

People are reporting that HS2’s activities are disrupting the wildlife in the area too. Campaigners – who are keeping a close eye on the works at Crackley Wood – have accused the company of chopping down a tree that “has birds nests in”. Activists shared a video which they claim shows the action taking place:

Meanwhile, others say they’ve seen “small panicked badger cubs” on a lane near the wood due to disturbance of the creatures’ setts:

Just had hysterical, heartbroken, sister on phone. She’s a key worker, farming near Crackley Woods. Huge area being cleared for #HS2. Woods being destroyed, small panicked badger cubs out on lane, as they rip up their sett. We both cried down phone, helpless… @ChrisGPackham

They took out 200 yr old Oaks, with video footage of birds nesting in there. Jess said the guy laughed at her distress at seeing the badger cubs…. It’s a disgrace

The Canary approached HS2 for comment on both the bird nest allegation and the sighting of badger cubs. A spokesperson said:

Any badger sett directly affected by HS2 has been closed under licence as agreed with Natural England. Other badger setts in the woodland that are not directly in the HS2 works area have been surveyed, identified and have exclusion zones around them.

We have professionally qualified environmental staff on site during the works operations, and have consent from the authorised bodies, including Natural England, for all planned work.

It’s often said that Britain is a nation of animal lovers. Our government sometimes rushes to the aid of other countries – with taxpayer money – to help protect their beautiful natural habitats. Yet in our own backyard, there is carnage. Contractors are tearing down trees which have stood their ground for hundreds of years, amid a catastrophic climate crisis. And for what? So a few wealthier people can get to their destination a little bit quicker?

What a shocking indication that is of our priorities, and what a terrible job we’re doing as guardians of the natural world that we owe our very existence to.