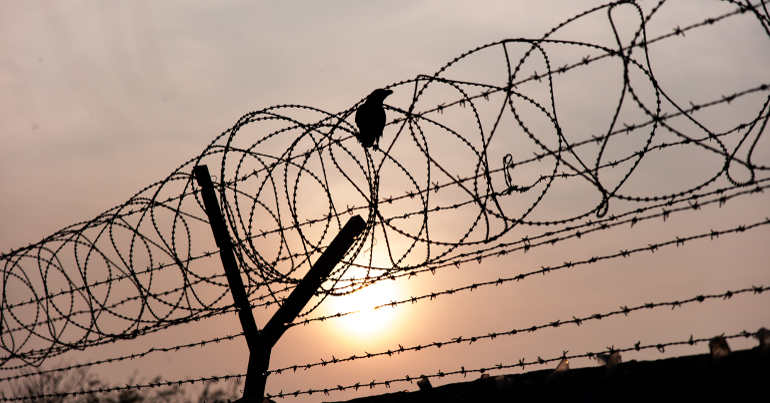 While the nation is distracted by Boris Johnson’s new baby and Colonel Tom’s 100th birthday, hundreds of people are still imprisoned in the UK’s detention centres.

With coronavirus (Covid-19) taking hold, detainees are in a desperate situation. On 29 April, Gatwick Detainees Welfare Group were receiving reports of people self-harming at Brook House detention centre. Brook House has become infamous for G4S staff’s brutal treatment of detainees over a number of years.

We're really concerned about the protest in Brook House yesterday. We've heard harrowing accounts of self-harm, fear and desperation. Despite no chance of flights to many countries due to #COVID19, detention continues.

Why are people still detained?

Terrible day hearing accounts of the distress during yesterday’s protest at Brook House. One man so scared he asked to be locked in his cell. The reality of detention under Covid-19 is desperation and frustration causing self-harm. Stop this toxic & dangerous situation now! pic.twitter.com/L4E328Cf8k

“They are terrified of what might happen to them”

The UK government released a number of people from detention in April, but didn’t even ensure that everyone released had safe accommodation. Campaign group End Heathrow Immigration Detention (EHID) told The Canary:

The Home Office claims that the only people still detained are people who are at ‘high risk to the public’. We know this is a lie and that people inside are not ‘dangerous criminals’, as the Home Office would have us believe. They are members of our communities, parents, friends.

Like many of us, they are terrified of what might happen to them if they get the virus. Many have illnesses that make them acutely vulnerable to Covid-19, and detention centres can never keep these people safe.

EHID has reported that staff in the UK’s detention centres are “moving freely between quarantine and non-quarantine areas, increasing the risk of spreading” coronavirus. And it should come as no surprise that staff are reportedly not receiving the correct personal protective equipment (PPE).

Those with underlying health conditions should be self-isolating, of course, but this is completely impossible in immigration detention. EHID told The Canary:

Social distancing is impossible, no PPE or anti-bacterial supplies are given to [the detainees], and it’s estimated that 60% of people in detention centres would contract the virus once it gets inside the centre. We demand the freedom of all those detained in prisons and detention centres.

There’s no legal or moral case for keeping migrants locked up indefinitely in dismal conditions at a huge cost to the taxpayer.

Spain has released all immigration detainees. We should do the same.https://t.co/sboMi4i6Ra

According to refugee rights organisation Medical Justice UK, there are a number of people who are at high risk of dying from coronavirus still being held in detention.

Earlier in April, Home Office contractor G4S sent a letter to an estimated 10% or more of Brook House’s high-risk detainees, telling them that they could be placed in effective solidarity confinement for at least three months. End Heathrow Immigration Detention (EHID) argues that this is inhumane:

The risks solitary confinement poses to the mental health and wellbeing of people is well documented, and it is completely unacceptable that the Home Office could suggest this cruel and inhumane treatment of people as an alternative to just releasing people from detention into safe and appropriate accommodation.

The Home Office must immediately release every single person held in this cruel, racist system. And it must provide everyone with a safe place to live. Otherwise, we’re going to see yet more unnecessary deaths at the hands of this government.