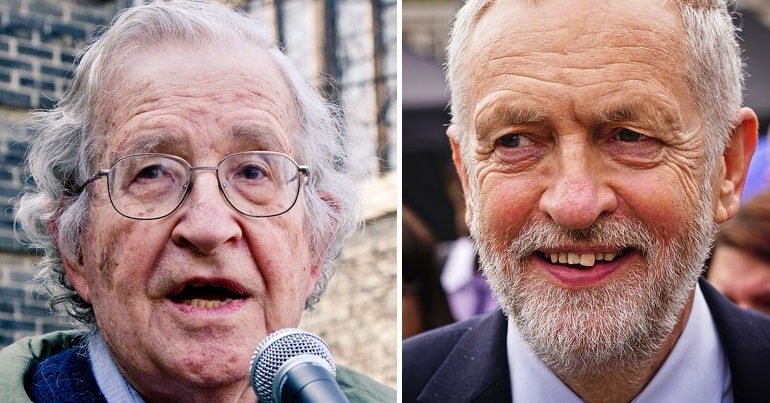 In under a minute, Noam Chomsky has summed up the Labour Leaks scandal perhaps better than any BBC journalist has in over a month.

Chomsky spoke to the Intercept just days after the scandal broke. Tom Colclough, the head of communications of the Fire Brigades Union, summed up Chomsky’s comments on Twitter: 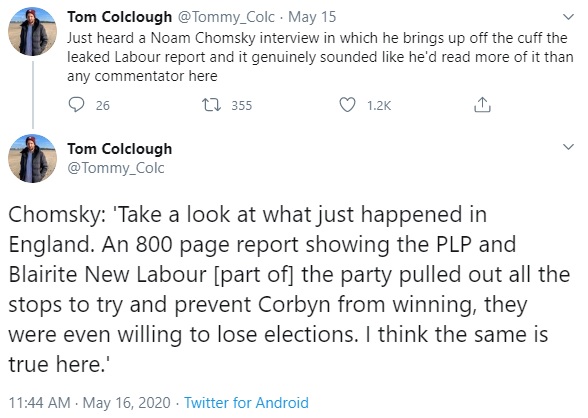 Indeed, the report claimed that senior figures at Labour HQ had actively undermined the party’s almost-victorious 2017 election campaign. This was perhaps the biggest disgrace in the eyes of many Labour members and supporters.

Chomsky also argued that, in much the same way, the Democratic Party establishment in the US preferred to back a potentially losing candidate rather than allow progressive outsider Bernie Sanders to become its presidential nominee:

It's only short but it's from this interview, 10mins50ish https://t.co/WHVFaVTcCW

The BBC website has covered, in a limited and matter-of-fact way, the leaked Labour report. But considering the broadcaster’s key role in the years-long media smear campaign against Jeremy Corbyn, its coverage of the Labour Leaks scandal has been eerily quiet. At the time of writing, for example, it seems that only one of the journalists on the BBC‘s own ‘BBC News Official‘ list on Twitter had tweeted about the affair (once). And even then, it was nowhere near the frank, cutting summary that Chomsky managed to pull together off the cuff shortly after the news broke.

The BBC‘s visibly indifferent approach to the Labour Leaks scandal is particularly stark when you look at what current and former employees are now up to. Because John Ware (responsible for the highly controversial 2019 Panorama hit-job against Corbyn and his party) and former BBC editor Robbie Gibb recently joined together with others to rescue a publication at the heart of anti-Corbyn propaganda efforts.

A year before the leaked Labour report, and 2 months before the BBC aired John Ware's controversial Panorama programme on the issue, leaked emails were already in the public domain showing the leadership's repeated attempts to speed up investigations and expedite sanctions…

So with many expecting Starmer and co to oversee a Labour Leaks whitewash, it seems highly unlikely that the BBC will be holding the new Labour leadership to account in any meaningful way.

The BBC should take a leaf out of Chomsky’s book, and just tell it like it is for once.