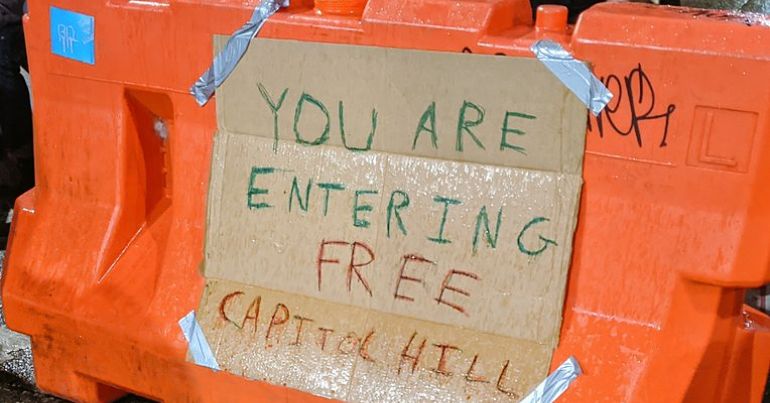 Citizens have declared the Capitol Hill inner suburb of Seattle a ‘free zone’. This comes in the wake of the brutal killing of George Floyd and the equally brutal attacks by police and the national guard on Black Lives Matter protesters across the US.

The declaration also followed vicious attacks by police using tear gas and flash bombs on protesters in Seattle itself:

But locals took direct action and six blocks in Capitol Hill have now been barricaded. CCTV cameras there have also been disabled:

This is revolutionary praxis

This is what the streets in Capitol Hill look like now:

It’s claimed that the far-right Proud Boys were seen in the area, but armed members of the John Brown Gun Club apparently turned up to see them off:

There are also reports that the police have semi-abandoned the local East Precinct building, which is now boarded up. A removal van was seen entering via a back entrance, as was a shredding truck.

However, mayor Jenny Durkan claimed to have received FBI intelligence that the police precinct building would come under attack and suggested that it would be defended. It’s also reported that police and national guard have mobilised in Volunteer Park.

Looks like the National Guard is staging in Volunteer Park. pic.twitter.com/7u2RarKICs

It’s not possible to predict what will happen next. The mayor has issued mixed messages, saying that she wants to “de-escalate”, but that she also wants to defend the police precinct building if it’s attacked. She may also decide to use the alleged FBI intelligence as a pretext for the police and national guard to launch an attack on the Capitol Hill ‘autonomous zone’.

In the meantime, the citizens in the Capitol Hill ‘free zone’ have shown that people don’t need government or police or capitalism to organise their own affairs – just mutual support. They may well inspire others across America and elsewhere to do the same. Unless, that is, they become victims of police and state aggression.