Live on air, a Tory minister defends the indefensible - Canary 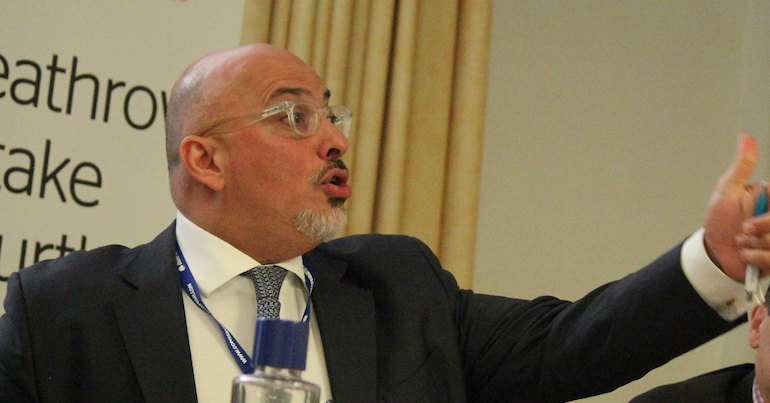 Police are currently investigating rape allegations against a Tory MP. Calls are rising for the MP to lose the whip and face suspension while the investigation takes place. But on 3 August, business minister Nadhim Zahawi defended the lack of suspension. Meanwhile, evidence suggests that senior Tories knew of the allegations in April but took no action. And it also comes at a time when rape prosecutions and convictions are at an all-time low, yet cases continue to rise.

On Sky News, the anchor asked:

Last week we heard from the Director of Public Prosecutions that just 1.4% of rape cases ended with a successful prosecution. Why has the MP who has been accused of rape not been suspended, why has the whip not been withdrawn?

Zahawi refused to answer; he simply repeated the fact that the case is under investigation. Even when pushed further and reminded that, in “any other place in the public sector”, suspension is the norm when such serious allegations exist:

.@nadhimzahawi why can't you answer the question? This is utterly abhorrent. https://t.co/nvBlfETwuk

Perhaps Zahawi’s response should come as no surprise. In 2018, he attended an elite male-only charity event called the Presidents Club. An undercover reporter revealed that female hostesses at the event “were groped, sexually harassed and propositioned”.

The alleged survivor told the Times that she first raised the allegations with Conservative chief whip Mark Spencer in April. He reportedly took no action, and didn’t encourage her to go to the police. Dorset Eye, meanwhile reported that Jacob Rees-Mogg also knew about the allegations. According to the Times, the survivor is “devastated” and:

criticised the party’s failure to take action despite being aware of the allegations. [Saying] “It’s insulting and shows they never cared”

Allegedly, Spencer didn’t “believe that a sexual assault was reported to him… but he acknowledges that she reported abusive behaviour and threats”.

However, this led to “serious questions” about senior Tories’ failure to act:

Tory MP and their Chief Whip @Mark_Spencer and Tory MP and Leader of the House of Commons @Jacob_Rees_Mogg were told about these rape allegations by another Tory MP a month ago. They did nothing. They both have some very serious questions to answer. pic.twitter.com/p6cIoL691M

Embarrassing response from Nadhim Zahawi MP on #r4today, compeletly unprepared as to why the Conservatives have not suspended the whip for the MP accused of rape, keeps repeating the police are investigating.
We know that. Why didn’t the Chief Whip do more when she reported it?

But this case shines light on the way that this government consistently fails to support women:

“Women must have the confidence that crimes, domestic violence and sexual abuse, are treated seriously ..” said @BorisJohnson last year. However, not suspending an MP accused of rape while investigations are ongoing conveys a different message.

Another serious issue is the utter disregard for any women still working with the MP under investigation:

Aside from everything else, what a total lack of concern for the safety of other women forced to continue working unknowingly, potentially late & alone in the office, with a man accused of rape.
Good luck to women in the Tory party. Your safety is clearly not a priority. #r4today

On 30 July, news emerged that in 2019-20 police recorded 55,130 rapes in England and Wales. But this only led to 2,102 prosecutions and 1,439 convictions. This is a lower level of successful action in rape cases “than in any other year where data exists”. According to the Guardian, Dame Vera Baird, the victims’ commissioner for England and Wales, said this “new low in CPS figures meant at least 1,000 fewer rapists were being prosecuted than two years ago, a fact that was ‘utterly shameful’.”

Meanwhile, director of the End Violence Against Women (EVAW) coalition Sarah Green stressed that these figures:

show starkly that we are right to say rape has been effectively decriminalised. What else can you call a 1 in 70 chance of prosecution?

Women’s Aid also challenged these “devastating statistics” and called for the government to deliver “a fully-funded, comprehensive new strategy to prevent violence against women and protect survivors”.

Women's Aid Acting Chief Executive Nicki Norman says:
📢“We have recently been warning that police referrals to the CPS for domestic abuse cases are falling, and urgently calling for action to ensure that this reduction stops."