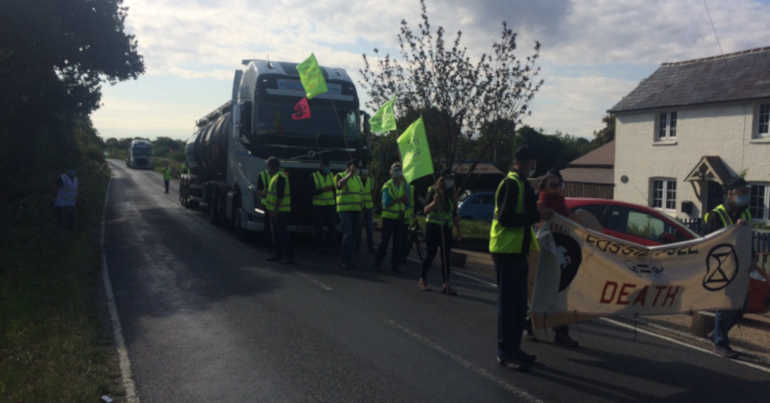 Eco-defenders slow-walked in front of trucks at the Horse Hill shale oil site in Surrey on the morning of 3 August. Campaigners are attempting to foil attempts by UK Oil and Gas (UKOG) to drill for oil. A permanent monitoring camp is set up at the site. The UKOG site has permission for 20 years of oil extraction at Horse Hill.

Protesters were given warnings by the police, despite a court of appeal ruling last year that challenged an injunction banning anti-fracking protesters’ use of the ‘slow-walking’ tactic at eight sites across England:

Within a spit of the #UKOG oil site gate, the cops decide to start reading warnings. Pointless, we’ve finished the convoy walk. pic.twitter.com/pvmQSLDFvB

We have a convoy! Two #BKP tankers for the price of one. We said no in 2014, in 2016 & we say NO now! Keep the (waterlogged) oil in the soil. Slow walking is legal protest! Someone tell the cops. #UKOG pic.twitter.com/IzSHJqA5Cy

Sarah, an eco-defender who was on the scene at Horse Hill, said that the convoy was delayed for a total of three hours.

Fracking by another name

The government announced a limited ‘moratorium’ on fracking prior to last year’s general election. This temporary pause on fracking was announced after the industry’s operations were repeatedly linked to increased seismic activity. However, the moratorium was based on a narrow view of what fracking is. The government’s announcement did not affect shale oil operations in Surrey and Sussex.

UKOG’s operation at Horse Hill is simply fracking by another name. Campaign group Back Off Horse Hill told The Canary:

Our government were so eager to support the fracking industry that via [the] Infrastructure Act 2015, they introduced a narrower definition of fracking based on the amount of fluid used. This meant that drill sites in the South East England like Horse Hill could be horizontally drilled using well stimulation techniques such as acidisation, which uses less fluid, and [will] not be defined as fracking.

Despite the government and industry’s attempts to say that the drilling at Horse Hill is not the same as fracking, campaigners say that the methods are just as dangerous. Back Off Horse Hill said:

Acidisation still involves injecting, at high pressure, solutions of acids and other chemicals into the well and often into the surrounding rock which bring similar risks as fracking. Despite persistent lobbying of the government, our drill sites here in the Weald do not fall under the current moratorium.

Resistance to exploration and drilling at Horse Hill has been ongoing since 2011. Charlie from the Horse Hill Rebel Alliance told The Canary:

Locals started campaigning about Horse Hill way back in 2011, the year the fracking film Gasland was first screened, becoming a call to action for so many, with Frack Free Surrey emerging a year later… UKOG returned to test flow in early 2016, and so did activists with a second protest camp in the hedgerow and two months of daily slow walking, peppered with lock ons & truck surfs.

Campaigning, protest marches, mass bike rides, public meetings, lobbying always echoed relentlessly in the background. Late 2017 saw a site occupation for a few days and UKOG sought to curtail protest – and even general campaigning – with an injunction, effectively taking the law into corporate hands. Local defendants stood up and have been fighting the injunction through the courts ever since.

A powerful slow walk of a couple hundred protesters in August 2018 became known as the Battle of Horse Hill, preceding the current monitoring camp which has sustained for two years now, bearing witness daily.

Local XR [Extinction Rebellion] groups brought renewed direct action to the site shutting it down with a gate lock-on in December 2019, another site occupation [in June 2020] and last Monday’s slow walk.

Sarah agreed that eco-defenders in Surrey and Sussex have been campaigning tirelessly for many years:

Campaigners have been resisting tirelessly in many different ways since the 2013 protests at Balcombe [in Sussex], which is possibly the only [local anti-fracking] struggle which [became] well known outside environmentalism. [Tactics have included everything from] local meetings to national lobbying, but it is the resistance on the ground that has delayed and prevented fracking… from taking hold in the UK.

The attempts to stop oil drilling at the site are ongoing and will continue. Charlie from Horse Hill Rebel Alliance pointed out one of the slogans which has featured on banners throughout the battles of Horse Hill:

We’ll be back! Expect us

A battle to defend nature

New plans to drill for oil are underway on the Isle of Wight and at several sites in Surrey and Sussex. They will face resistance. A statement from campaigners reads:

we are here until this industry is gone and the meadows, farms and ancient woodland are restored. We’ve seen a glimpse of that restoration during Lockdown, of nature sighing with relief, nature joyous, nature flourishing. It was a sight of such inspiring & enchanting beauty & potential, that we will hang onto.

This industry, already on its knees, has taken a huge hit during the pandemic, set for $1 trillion in revenue losses this year. Help us finish it off.