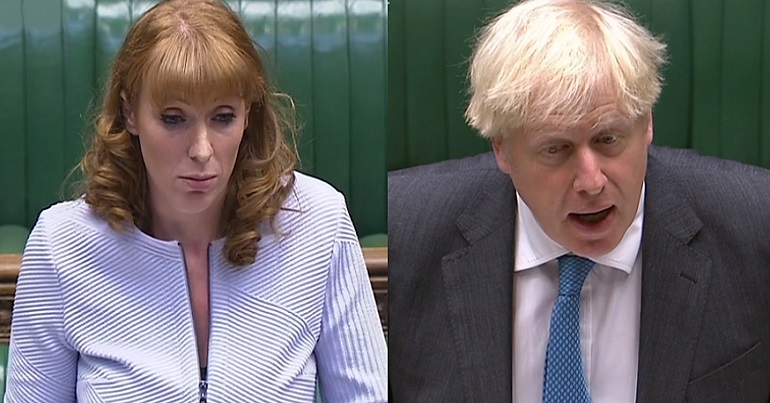 At Prime Minister’s Questions (PMQs) on Wednesday 16 September, Boris Johnson was out of his depth for the second time this week after another Labour frontbencher skewered him.

Labour’s deputy leader Angela Rayner was standing in for Starmer who was in self-isolation due to one of his children having coronavirus (Covid-19) symptoms. His child’s test thankfully came back negative just before PMQs began. So, Rayner was at the despatch box. And the PM seemed out of his depth for the second time this week, after shadow energy secretary Ed Miliband mauled him on Monday 14 September.

Over the course of the speech an increasing[ly] uncomfortable and dishevelled looking Prime Minister sank lower and lower in his seat, occasionally shaking his head as he was repeatedly taunted by Mr Miliband.

Rayner took an almost Jeremy Corbyn approach to PMQs. She opened with a “message that I received from a man called Keir”. This was similar to the way Corbyn used to open PMQs with questions directly from members of the public. Rayner said:

Keir wasn’t able to go to work today… because his family had to wait for their coronavirus test results… Keir was able to do the right thing, and self-isolate, and work from home. But other people aren’t in this position… many of them are the very people who are getting us through this crisis. Like the care workers that I used to work alongside… The prime minister once earned £2,300 an hour. So can the prime minister tell us what is the average hourly rate of a care worker in this country?

Johnson rather limply blundered his way through some a half-baked response. He noted that:

But he failed to say what the average hourly rate of a care worker was. And Rayner didn’t let him off the hook. She bounced it back to him again, saying:

The whole country… would have seen that the prime minister doesn’t know how much a care worker earns… The shameful fact is that the average wage in social care is barely more than £8 an hour, and half of our social care workers earn less than the real living wage.

She continued to slam Johnson throughout. She asked about social care funding; what was going on with the UK’s chaotic coronavirus testing in care homes, and what the situation was with the average number of overall tests per day. Johnson, naturally, fumbled around with his answers – showing once more that when under pressure, he collapses.

What a show up

Rayner, like Miliband, was incisive and to the point. They both refused to let an increasingly weak Johnson off the hook. The PM is looking more and more incapable of deflecting criticism and holding himself up to scrutiny; unsurprisingly so.

But Rayner and Miliband have also prompted another question: will the previously mediocre Starmer now up his game? Because two of his frontbenchers showed him and the PM up this week.