Never mind the presidential debate. Here is the real video we should all be watching. - Canary 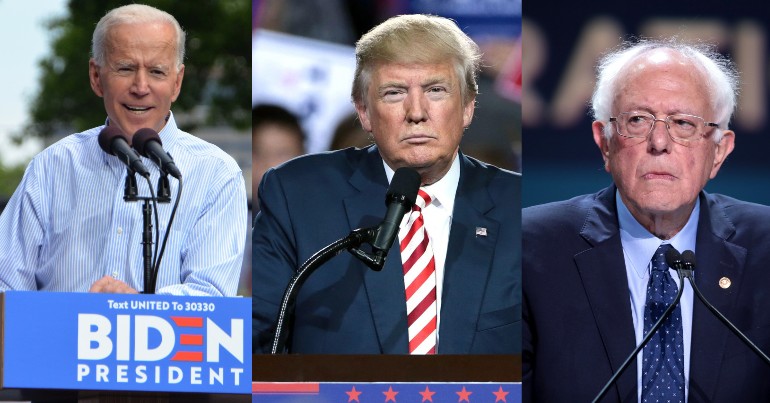 The firsts US presidential debate took place this week and has already created a firestorm of commentary. It has been dubbed the “worst presidential debate in history” owing largely to US president Donald Trump’s churlish behavior throughout. But as the eyes of commentators are focused on this latest entry in the long-running freak show that is the Trump presidency, there is one YouTube video that raises a far more interesting question: why is it that the careerist Joe Biden is Trump’s opponent and not the far more popular and radical Bernie Sanders?

On 29 September, Trump squared off against Democratic Party nominee Joe Biden in the first in a series of debates. Trump reportedly interrupted Biden and the moderator over 100 times, often with his usual arsenal of childish insults and petty deflections. Biden also went personal at various points, calling Trump a “clown” and “the worst president America has ever had”.

The comment that caused the most controversy was in response to the moderator asking Trump if he is willing to unequivocally denounce far-right groups that support his campaign. After moderator Chris Wallace asked specifically about one white supremacist group called the ‘Proud Boys’, Trump said that the group should “stand back and stand by”. This was widely interpreted as Trump giving them a green light to engage in violence in the event he loses.

Largely forgotten behind these commentaries, however, is a far more interesting question: how on earth was it that Biden, who is apparently unable to even string a coherent sentence together, became the Democratic Party nominee in the first place? An incisive YouTube video lays out a strong case that fellow candidate in the Democratic primary Bernie Sanders was robbed of the nomination.

Victor Tiffany of Revolt Against Plutocracy said in a message for Bernie Sanders supporters:

Did you ever wonder how Bernie went from frontrunner coming out of Nevada to getting crushed within a period of a week? Or, conversely, how did Joe Biden – [a] weak candidate [who] did no better than third place in those first three [primary] contests – go to frontrunner in a week later?

Tiffany points out that former president Barack Obama said in 2019 that he would intervene in the primary to stop Sanders. Quoting from an article published in the Washington-based Politico newspaper, Tiffany said:

Back when Sanders seemed like more of a threat than he does now, Obama said privately that if Bernie were running away with the nomination, Obama would speak up to stop him.

That’s what happened. That was November of 2019. And after Nevada, Bernie Sanders had won the popular vote in the first three contests. Then, as NBC reported… ‘As Democrats begin to coalesce around Joe Biden as the moderate’, by the way, that’s a euphemism for neoliberal, ‘moderate alternative to Bernie Sanders, there appears to be a quiet hand behind the rapid movement: former president [Barack Obama]’.

Tiffany also mentions how Elizabeth Warren stayed in the race while the other ‘centrist’ (i.e. center-right) politicians pulled out to back Biden. He said:

The corporate media giving cover to its paymasters

He argued that the media also played a key part in this plot to prevent Sanders from winning. He said:

For Tiffany, there is a very straightforward explanation for why this happened. He said:

Bernie had to be stopped. Not because he’d lose to Trump, although that lie was told… But rather because if he did defeat Trump as the party nominee, he would take over the Democratic Party. The Democratic Party would no longer be the neoliberal corporate party it has been since president Jimmy Carter. Instead it would be a labor party and that would cut off all the money, the cashflow coming from Wall Street bankers and corporate America into the party coffers. And the establishment just wasn’t going to allow that.

You can’t have a revolution inside a counterrevolutionary party.

Finally, Tiffany delivered a powerful message to US voters about the upcoming election:

Bernie was robbed. And so, Bernie supporter, I have to ask you: do you hire burglars to housesit for you when you’re away? Do you hire kidnappers to babysit your children when you’re out with your spouse or boyfriend or girlfriend? Because voting for Joe Biden is the equivalent of that kind of stupid behavior.

[Trump] is the greater of two evils, right? Wrong! [In] my next video I’m going to cover how Biden is the bigger racist, Biden is more violent in foreign policy, Biden is a greater threat to the democratic order than Donald Trump. And Trump is violent too… But Biden is the more dangerous of those two candidates.

Tiffany unequivocally recommends a vote for Green Party candidate Howie Hawkins – irrespective of whether one lives in a swing state or a non-swing state. (To see The Canary’s exclusive interview with Hawkins from earlier this year, click here.)

Clearly, Sanders would now be facing Trump had it not been for the duplicitous machinations of the establishment wing of the Democratic Party and its corporate paymasters. As a result, the contest between the candidates from the two major parties is essentially one in which rival wings of the neoliberal and imperialist status quo jostle over who gets to spend the next four years pillaging abroad and imposing austerity upon its own working- and middle-class at home. We live in bleak times, and casting a vote for this status quo gives a tacit endorsement to its continuation. Perhaps it’s time to consign the Democratic Party to the dustbin of history.

The author of this article is a Green Party candidate for local government in Washington, DC.