Britain's status as rogue state confirmed, thanks to latest moves by the Johnson Gang to flout international laws - The Canary 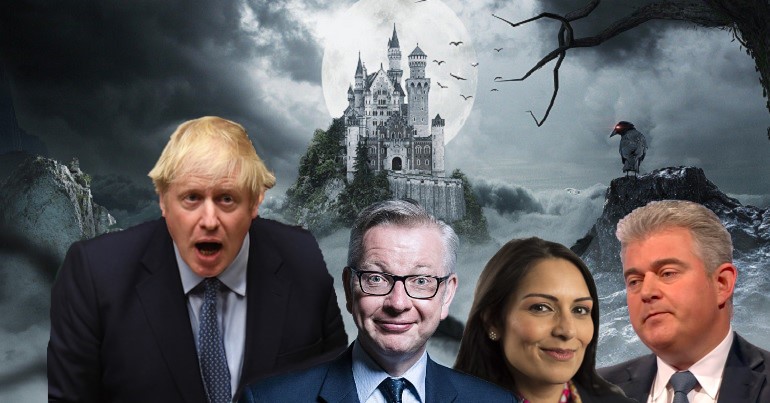 Outrageous government proposals regarding asylum-seekers, together with a bill to provide immunity to crimes committed by UK military and another that may wreck the Good Friday Agreement, could see the UK in violation of international laws.

Moreover, that the UK is regarded as a ‘rogue state’ appears to be of no concern to the Johnson Gang. For it’s all about changing mindsets: what was once completely unacceptable is now the norm.

Leaked documents show that Downing Street sought ideas on how best the UK could deal with asylum-seekers trying to reach the UK. It’s understood that in response to Downing Street, home secretary Priti Patel consulted the foreign office on the feasibility of an offshore asylum processing facility. This would be similar to facilities organised by Australia on Manus Island (Papua New Guinea) and Nauru. Ideas subsequently floated include transporting asylum-seekers to Moldova, Morocco, Papua New Guinea, Ascension island, or St Helena (the latter two forming part of British Overseas Territories). However, the arbitrary detention of asylum-seekers offshore has been declared unlawful by the International Criminal Court, based on the Rome statute, to which the UK is a signatory.

Referring specifically to the detention of asylum-seekers on Manus and Nauru, the ICC prosecutor’s office said:

These conditions of detention [at Manus Island and Nauru] appear to have constituted cruel, inhuman, or degrading treatment (“CIDT”), and the gravity of the alleged conduct thus appears to have been such that it was in violation of fundamental rules of international law.

The ICC declaration was in response to a submission by Australian independent MP Andrew Wilkie. The submission was regarding crimes against humanity in Australia under the Tony Abbott government.

In 2016, the Papua New Guinea supreme court ruled that the asylum-seekers detention facility was illegal. And the court demanded that Australia resettle those held:

A year later, Victoria’s supreme court approved a deal that awarded 1,923 current and former asylum-seekers held on Manus $A70m in compensation for their illegal detention.

Take Moldova. It is “the poorest country in Europe”, with the lowest ranking across the continent in the Human Development Index. No doubt it would welcome any multi-million pound subsidies that the UK may offer to take in and detain asylum-seekers. But would UK voters? And there are legal considerations too. Both Moldova and the UK are members of the Council of Europe (CoE). The UK helped set up the CoE in 1949, and it’s distinct from the EU. The CoE is also responsible for the European Convention on Human Rights (ECHR), which prohibits arbitrary arrest and detention. Should Moldova be party to the arbitrary detention of asylum-seekers transported there from the UK, it could be in violation of the ECHR.

Moreover, it seems the Johnson government has a penchant for flouting international laws. The Overseas Operations (service personnel and Veterans) Bill specifies:

a presumption against prosecution in respect of alleged offences committed on overseas military operations more than five years ago, pursuant to which decisions to bring proceedings in such cases will be ‘exceptional’.

The bill also requires that the courts consider “the operational context when deciding whether to extend the normal time limits” for civil personal injury or death claims, as well as for “claims under the Human Rights Act (HRA) in connection with overseas operations”. In other words, the court can decide that a claim against UK personnel should not proceed, should the circumstances regarding the alleged crime mitigate that crime.

Furthermore, UK governments will be “compelled to consider derogating from the European Convention on Human Rights (ECHR) in relation to significant overseas military operations”.

officers are concerned that, not only do the proposals undermine international law, but also potentially encourage other rogue nations to follow suit. …

A professional army complies with the rule of law rather than circumvents it.

A paper by human rights experts on UK military operations in Iraq comments:

The UK ratified the ICC Statute on 4 October 2001, thereby providing the ICC with jurisdiction over the statutory crimes of war crimes, crimes against humanity and genocide committed on British territory or by British nationals abroad as of 1 July 2002, and taking upon itself other duties set out in the ICC Statute, including with respect to cooperating with the Court.

The paper adds that:

Meanwhile Labour, under Keir Starmer, refused to oppose the bill.

Another example of the Johnson Gang flouting laws is in regard to the Internal Market Bill. If enacted, it could mean the restoration of customs checks along the Irish border. Northern Ireland secretary Brandon Lewis admitted the legislation would breach international law and told the Commons:

Yes, this does break international law in a very specific and limited way. We’re taking the powers to disapply the EU law concept of direct effect… in a certain very tightly defined circumstance.

US speaker of the House Nancy Pelosi said that if the legislation proceeds, it could undermine the Good Friday Agreement and jeopardise a post-Brexit trade deal between the US and the UK. More recently, the EU commenced legal action against the UK on this matter. Crucially, the Northern Ireland Assembly passed a motion rejecting the bill.

The outrageous ideas regarding asylum-seekers are what journalist Paul Mason sees as all part of a “culture war”:

Let's understand what "offshore refugee processing centres" and "wave machines to deter crossings" are: racist fantasies. They're being floated as ammunition in the culture war by far right ideologues in Whitehall…. 1/

Or as Guardian columnist Nesrine Malik puts it:

[Cultural war skirmishes] are how rightwing electoral prospects are now advanced; not through policies or promises of a better life, but by fostering a sense of threat, a fantasy that something profoundly pure and British is constantly at risk of extinction. What our most successful politicians understand is the insatiable public appetite for these falsehoods, the wish for these lies to be true – for Britain to be a precious damsel in distress rather than a battered country impoverished by the misrule of its governing class.

The fabricated ‘threat’ posed by asylum-seekers, the EU, and the international courts are examples of how the Johnson Gang hopes to exploit jingoistic tendencies. And it does this to distract from its own failures.

But by flouting international laws and treaties, Johnson risks further the UK’s international reputation. Though perhaps that is what British exceptionalism is all about.