Labour's support for Rashford is a sham. Here's why. - Canary 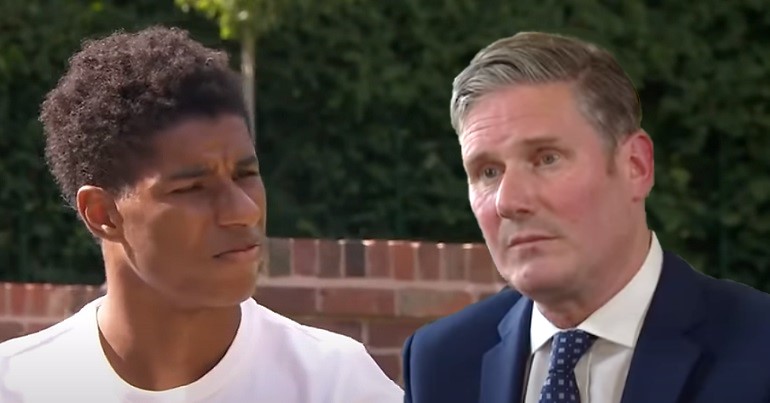 If there’s a bandwagon to be jumped on, you can be sure that Keir Starmer’s Labour Party will be first in the queue. But its support for footballer Marcus Rashford’s campaign over free school meals is actually a sham.

Rashford has become a prominent anti-poverty campaigner. Most recently, he launched a petition calling on the government to end child food poverty. The petition has three asks:

Currently, children only get free school meals if their parents/guardians earn less than £7,400 a year. Also, there is no support with food during the holidays. Charities have been picking up this role. Meanwhile, Healthy Start Vouchers are given to parents/guardians who claim social security, but they’re means tested. The vouchers are worth £3.10 and are for children under four or pregnant women.

The BBC said that the party:

has given ministers 72 hours to agree to provide free school meals during the holidays, warning that one million children could be left hungry.

Shadow education secretary Kate Green said ‘now is the time to act’, and Labour warned would force a vote by MPs if the programme is not extended.

‘Hurrah!’ you may think. But Labour’s support is not actually all that it seems.

As one person tweeted:

On #Ridge Kate Green confirms that Labour wants free school meals during holidays for children of families on UC only for this academic year. That's a long way short of what Marcus Rashford is campaigning for.
When I pointed that out yesterday I was called a liar.

And as Green confirmed on Sophie Ridge on Sunday, Labour does only support Rashford’s campaign “whilst we are in the depths of this crisis”:

"Families are in a desperate situation."

Shadow Education Secretary @KateGreenSU says Labour wants free school meals for children during holidays "whilst we are in the depths of this crisis", adding it would make an "enormous difference". #Ridge https://t.co/XfcjotWjor pic.twitter.com/L5JXttWyaw

This is not what Rashford is calling for. He wants the government to provide free meals permanently during school holidays.

So it seems Labour is actually sitting on the fence again – this time over child food poverty. Which will do nothing to sort the issue out. Because the problem of hungry children in the UK is nothing new.

We need a system change

In 2017, UNICEF said that around 2.5 million children in the UK lived in food insecurity. At the same time, only 42% of children entitled to free school meals actually got them. By 2019/20, The Trussell Trust said it had given food parcels to over 700,000 children. And as The Canary previously reported, social security has not been enough for parents/guardians to adequately provide for their children.

Before the coronavirus (Covid-19) pandemic, we already had a huge problem in the UK with child food poverty. The pandemic has made that worse. So Labour’s half-baked support for Rashford’s campaign is nowhere near good enough. But ultimately, the footballer’s demands are also only a temporary solution. We need a system change. It must be one that ends poverty for good. And then the state would not need to support parents and children. Until then, everything else is just a quick fix.