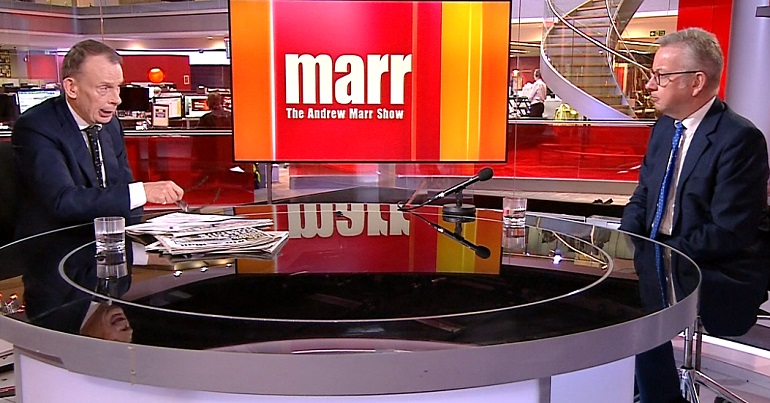 Michael Gove was on the Andrew Marr Show on Sunday 18 October. And its host just let him twist coronavirus (Covid-19) facts, “unchallenged”. Or as one MP put it, Gove simply ‘lied‘.

Cabinet Office minister Gove was talking about a range of issues. But as Green MP Caroline Lucas summed up, he turned “lies and prevarication into [a] new art form”:

Is he embarrassed, asks Marr? Of course not, he’s incapable of it

Blame others, take no responsibility, Gove’s perfectly on message on #Marr

Even Marr got fed up with Gove at one point. The host threw Gove some shade after he waffled for ages. Marr kept trying to ask him things, and ended up saying:

I have to ask occasional questions, that’s the kind of way it works.

And I have to give comprehensive answers.

But Marr was clearly not happy, as he said:

You’re certainly giving comprehensive answers, and we’re hearing another one of them now.

More waffle from Gove followed. But despite Marr’s seeming annoyance, he still let Gove off the hook on one major point.

“Number of People being tested is higher then ever before. 300,000 tests administered on Friday”

That was tests “processed”. That’s not the same as number of people tested (a figure hidden by the gov’t) cc @piersmorgan pic.twitter.com/fSBaP56cgw

Indeed, the government says that on Friday 16 October labs “processed” 304,315 tests. But as the website says:

This is a count of test results and may include multiple tests for an individual person.

In other words, this is not the number of people who’ve had tests. And the government doesn’t say how many people that is. But Marr did not challenge this.

To be fair to Marr, he was actually slightly more rigorous in his questioning of Gove than usual. He even seemed shocked by one of Gove’s responses.

Marr asked Gove if the £7,000 a day the government was paying to consultants for Test and Trace was “good spending of public money”. Gove said “yes”. Even Marr was rattled:

But Gove’s continued waffling meant the interview was little more than a party political broadcast. Because Marr was not in control, Gove was. Which is yet another damning indictment of the state of the BBC.