Serco boss sent a letter to MPs. His brass neck is staggering. - Canary 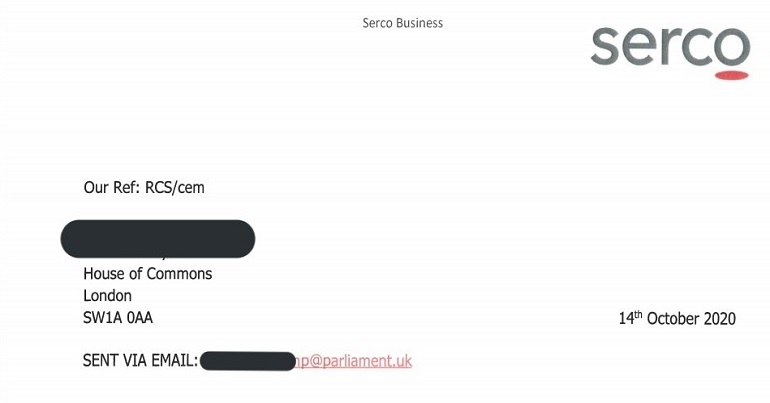 The boss of disastrous outsourcing giant Serco has written to some MP. But he didn’t say ‘sorry’ for his company’s failings over Test and Trace. Instead, he delivered a passive-aggressive ‘STFU’ about his firm’s multimillion pound clusterfucking.

As openDemocracy reported, Serco’s part in the coronavirus (Covid-19) test and trace system has been shambolic:

The British government’s decision to outsource much of its flagship £12 billion test-and-trace system has been heavily criticised… rates of contact tracing have dropped and many Britons have complained about problems accessing COVID tests and testing sites.

Not that Serco is worried. Because its profits are going through the roof. But still, it’s been on the receiving end of a lot of bad publicity. So, Serco’s CEO Robert Soames decided to do some PR firefighting.

The Sunday Times‘s Gabriel Pogrund has released a letter from Soames. Pogrund reports (in a now deleted tweet) that the letter’s recipients are “MPs who are critical” of Serco’s test and trace shambles:

The letter is quite something. Soames calls Serco’s part in test and trace a “logistical triumph”. No, really – he does. He says Serco runs around 25% of test sites and “50% of the Level 3 contact callers”, which he describes as “only a small part of the programme”. And he pins the blame for the system’s chaos on “laboratories which process the tests”. Soames says that Serco has delivered all of its jobs in test and trace “on time and to budget”.

Soames essentially says that the problems are elsewhere. Unfortunately for him, this is not quite true.

For example, as The Canary reported, Serco and another contractor Sitel have failed to trace 40% of contacts of people with a positive coronavirus test. This was over a period of four months.

Serco may have done things “on time and to budget”, but whether these things actually work well or not is another matter. Moreover, as HuffPost reported, Serco has been sneaky with the contracts. Because it’s subcontracted parts of its job to 29 other firms. This means that 85% of the Test and Trace staff who are doing the job the government gave to Serco don’t actually work for Serco. So Serco can put the blame elsewhere when things go wrong.

Soames’ letter whitewashes Serco’s part in the shambles. And the fact that he’s writing to MPs also shows something else.

That Soames has targeted MPs who’ve criticised Serco is worrying. It’s a blatant attempt at shutting up politicians. As Soames says in the letter:

In other words – stop criticising Serco publicly. This corporate strong-arming sums up the Tory government. And when you look into it, the Test and Trace shambles isn’t really Serco’s fault. It’s the government’s. Because when you sell a public health system to one of the most notorious outsourcers in the history of privatisation, what do you think is going to happen? Then again, Soames is the brother of a former Tory MP. So this level of disastrous cronyism is par for the course.

Read the full letter below: 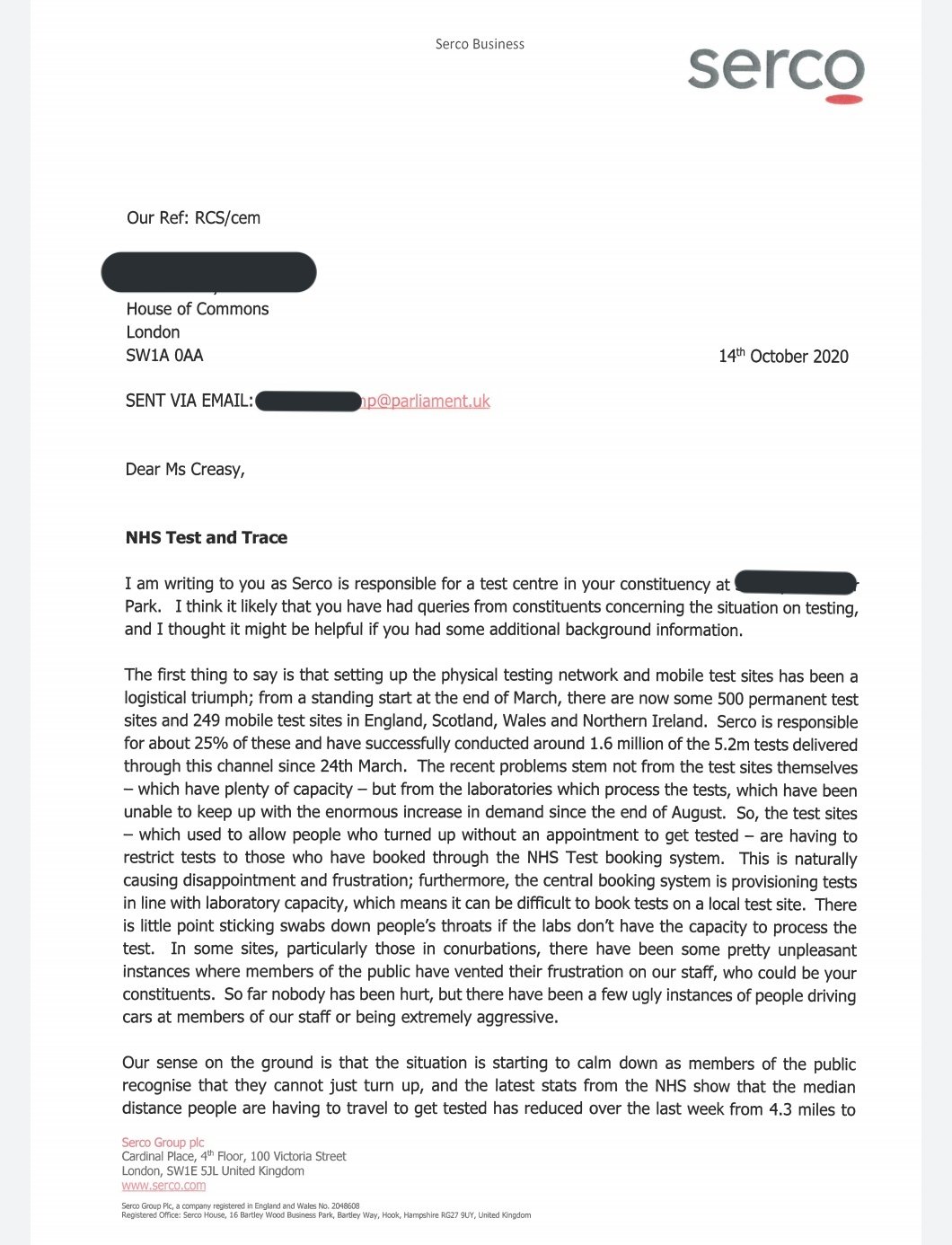 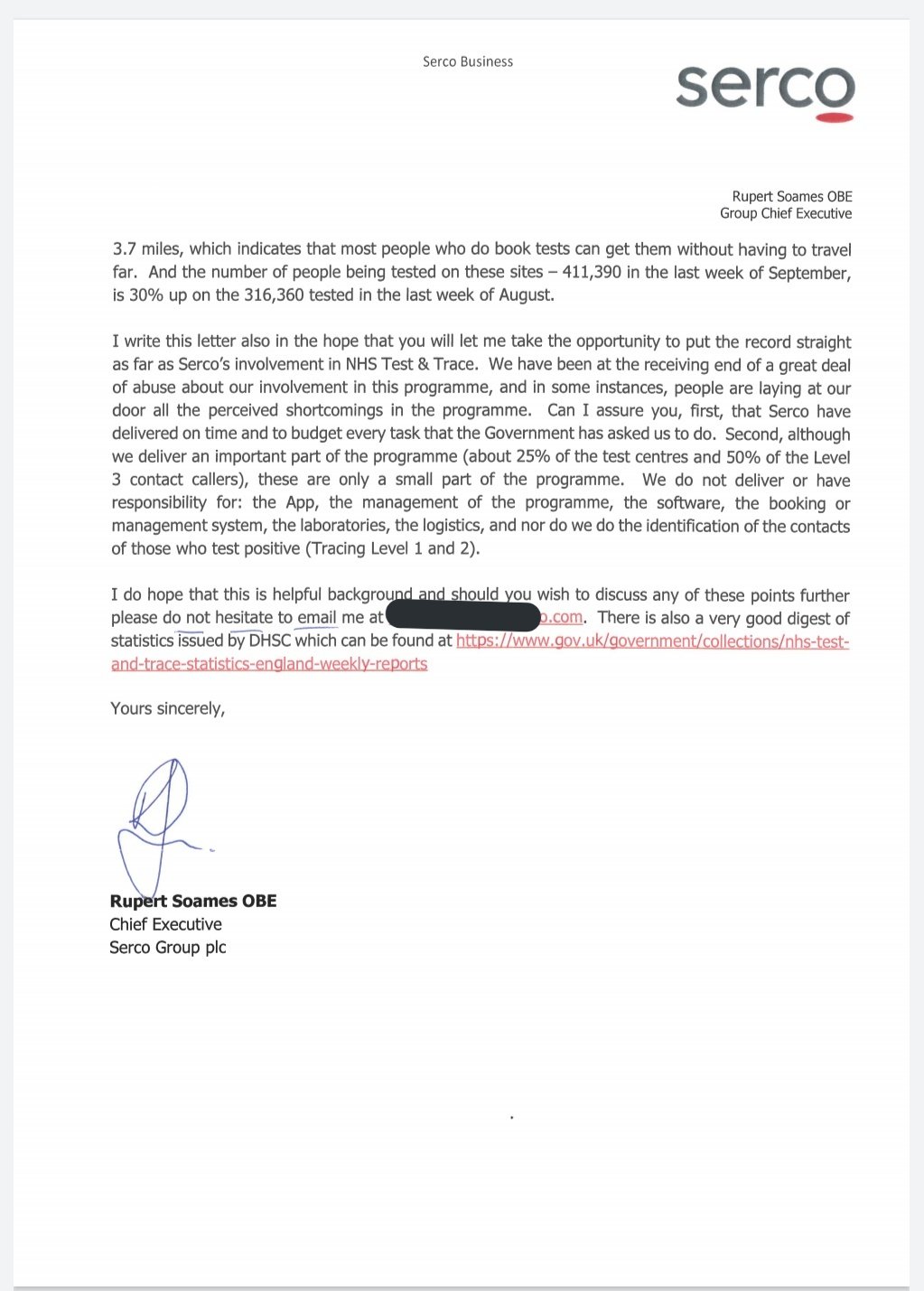