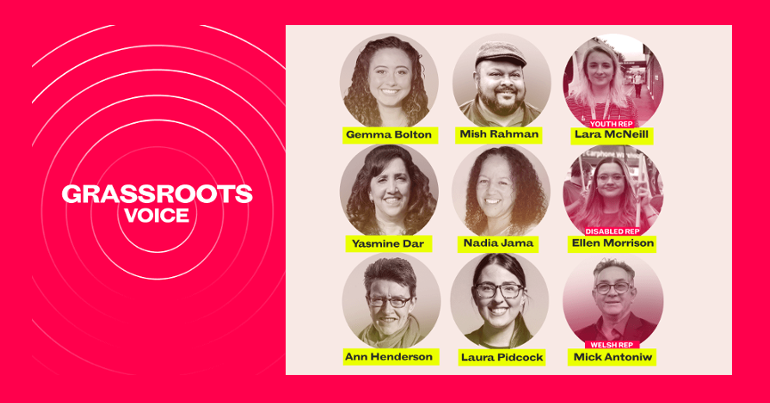 On Monday 19 October, Labour party members can begin voting for the candidates they want to see on the party’s National Executive Committee (NEC). The NEC is the Labour Party’s governing body, making key decisions, such as who can run as a parliamentary candidate, as well as having a key role in deciding on the party’s manifesto. Those who are standing are competing for nine seats.

Six left-wing candidates standing for election have formed a slate called Grassroots Voice. This team of candidates said: “who gets to sit on [the NEC] and what their political beliefs and motivations are is extremely important.”

We need to give young people hope for the future, and fight for rent controls and the abolition of tuition fees. If this pandemic has taught us anything, it’s that Britain needs socialist policies more than ever. It’s time to build a Labour Party that can fight for the future we need.

Who are the candidates?

Mish Rahman is one of the six Grassroots Voice candidates standing for election onto the NEC. He says:

As a working class man of Bangladeshi heritage whose father campaigned with the Anti-Nazi League against the National Front, I’ve always been a committed anti-racist activist.

Rahman says that he will prioritise LGBTQI+ rights:

I will stand in solidarity with the entire LGBTQ community in proudly demanding their rights, including trans rights. Trans women are women, trans men are men, and non-binary people are non binary. Labour must continue its support for reforming the Gender Recognition Act and stand up to the Tories’ attempts to fuel prejudice against the trans community.

“We need to provide the fightback”

Another candidate is former Shadow Secretary of State for Employment Rights Laura Pidcock. She says the economic crisis is “set to be the worst any of us have experienced”, and believes that:

we urgently need to build the fightback and movements necessary to argue for transforming our economy and society to ensure that people’s jobs, livelihoods and health come before private profit.

Pidcock argues that the Conservatives’ handling of the coronavirus pandemic has failed the population. She says:

Their priority of protecting profits has already led to tens of thousands of unnecessary deaths and has not contained the virus.

Candidate Nadia Jama explains why she is a good choice for the NEC:

I grew up under Thatcher’s government on a council estate near Orgreave, the daughter of a Somali steel worker and grand-daughter of a Liverpool docker. The authentic voices of working-class Black women must be central to our movement. I’ll be a strong voice for members and party democracy.

What do they stand for?

The candidates are pushing for a Green New Deal, stating that:

By 2030 we need to create a zero-carbon economy that works for the vast majority of society, not the billionaires.

We can’t wait to tackle the existential threat of climate breakdown. This can only be done with an ambitious Green New Deal that prioritises jobs and improving people’s living standards.

The candidates also stand for “transformative socialist policies” and “liberation and equality”. They say:

We will make sure our party is unified in the fight against racism, antisemitism, islamophobia, Afrophobia, homophobia, transphobia, biphobia, ableism, sexism, sexual harassment, and the scapegoating of migrant and Traveller communities.

This election will be the first time that the Single Transferable Vote (STV) system has been used. Previously, First Past The Post, or ‘bloc voting’, was used. According to the Electoral Reform Society:

STV allows voters to rank candidates based on their preferences. If candidates reach the minimum ‘threshold’ of support, they’re elected. If a candidate has more support than they need, those voters’ second preferences are taken into account to fill the other spaces.

However, the STV system could result in fellow candidates being knocked out of the election early. To avoid this, Grassroots Voice is keen to explain that the order in which Labour members vote for their preference in positions 1 to 6 is important and depends on the region you live in.

Labour party members should find their ballot in their email inbox. If in doubt members can contact [email protected] Votes must be cast before Thursday 12 November and the results will be announced on the following day.