Priti Patel's BBC interview was nothing short of disgraceful - The Canary 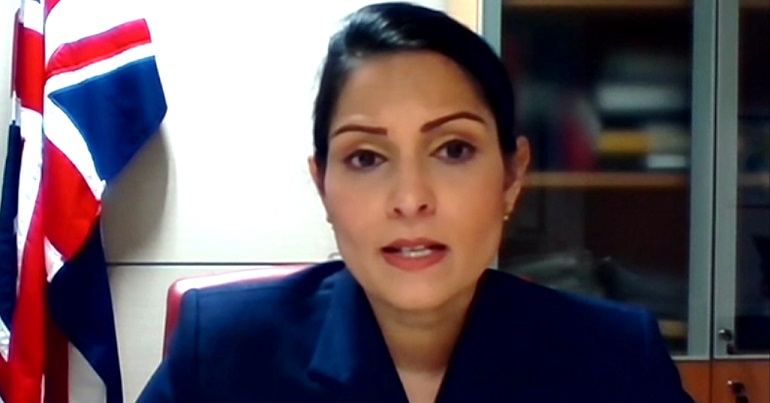 The Conservative government plumbed new depths of vileness on Wednesday 20 January. Because home secretary Priti Patel’s appearance on BBC Breakfast was nothing short of disgraceful. And it was even worse in light of a documentary that aired the previous night.

On Tuesday 19 January, the UK had its highest death toll of the coronavirus (Covid-19) pandemic. 1,610 people died from the virus. That evening, ITV aired a documentary called Outbreak: The Virus That Shook The World. It was a look back at the past year of the pandemic. Some of the media focused on China’s role. But the documentary was equally damning about the UK government.

Director of virology Deenan Pillay said in Outbreak that:

Community testing of individuals which hadn’t been very successful and the contact tracing was stopped, because we didn’t have the capacity to do that.

He was scathing about the Tories’ handling of the pandemic; specifically Eat Out To Help Out:

At the time of the end of lockdown in July 2020, we needed an environment and an infrastructure that would keep infections down. And the test and trace system was completely failing.

if we look at the… comparable figures, we’ve got double the death rate nearly of Spain and of Germany. Why is it so bad in the UK? And has it been mismanaged by your government?

I don’t think this is the time to talk about mismanagement.

But the UK’s one of the worst; worst in Europe and I think the fifth worst on the global stage.

Patel was still having none of it:

But there’ll be a range of reasons for that. There won’t be one specific reason.

#BBCbreakfast “We’ve got double the death rate nearly of Spain & Germany. Why is it so bad in the UK & has it been mismanaged by your Gov’t?”

Priti Patel “I don’t think this is the time to talk about mismanagement” pic.twitter.com/18sunlc9jw

In reality, there is “one specific reason” why the UK has been devastated by coronavirus. And it’s the Tory Party.

Johnson and his pals in government thought 2020 was always going to be about brexit and how much money their chums could make from it. They never expected the virus and they never had any clue on how to deal with it.

And as he recently wrote about the roll-out of the vaccine:

the Johnson government’s approach seems to be all about cutting corners for political gain. Or, worse, just making it up as they go along.

Such an approach is inherently dangerous, not only in terms of deaths from coronavirus but for the politicians themselves, who will and are being exposed for their spectacular failures.

The ITV documentary partly exposed the negligence of the Tory government. But Patel kicking the issue of her government’s appalling handling of the pandemic into the long grass is dangerous (but also par-for-the-course of the past 12 months). Because the challenge is that once the dust has finally settled on coronavirus, much of the public may want to get back to their normal lives. Tory accountability for tens of thousands of deaths and the collapse of the economy may get conveniently forgotten. So, it’s up to all of us to make sure this doesn’t happen.