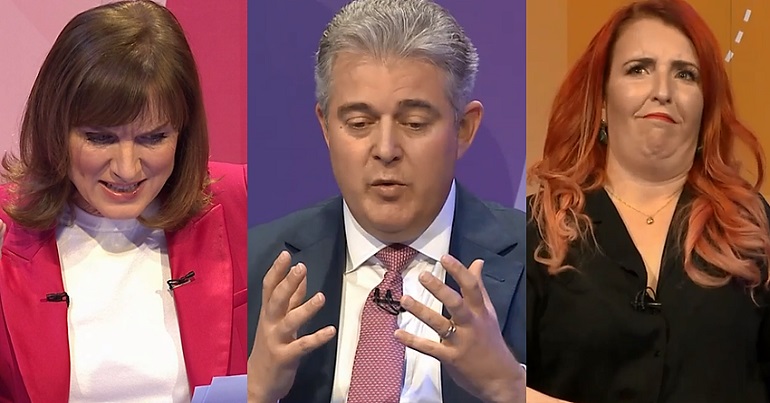 A Tory minister’s response to a Labour MP’s criticism of his government’s handling of the coronavirus (Covid-19) pandemic was damning. Because he inadvertently exposed the problem at the heart of his government’s approach over the last ten months. And he did it on BBC Question Time.

The programme saw its viewing figures plummet last year. But even so, there are sometimes important moments that Question Time throws up. Parliamentary under-secretary Vicky Ford’s controversial comments about free school meals on 14 January was one such occasion. And the show on Thursday 21 January was another.

Shadow Northern Ireland secretary Louise Haigh was criticising the government’s handling of the pandemic. She said:

I’m afraid to say that the measures that they’ve taken, the slowness in going into lockdown and the speed at which they’ve lifted some of these restrictions have caused avoidable deaths, and it was foreseeable – and throughout this pandemic it’s been completely foreseen.

Secretary of state for Northern Ireland Brandon Lewis defended the government. But one important phrase stood out.

‘Led by the science’?

All the decisions that we have made, all the way through this, have been led by the scientific and medical advice we have had.

Lewis continued to infer that it was the scientists driving the Tories’ approach:

We’ve made the decisions based on the medical and scientific advice the government has had.

So, apparently, the Tories have been led by the “scientific and medical advice”. Problem is, that’s not what another senior minister said just over a month ago.

Or ‘informed by the science’?

As The Canary previously reported, on 9 December 2020 Good Morning Britain (GMB) host Piers Morgan skewered Cabinet Office minister Michael Gove. It was over so-called herd immunity. Back in March that year, the government’s chief scientific adviser Patrick Vallance repeatedly said in the media that the government was aiming for herd immunity. But on GMB in December, Gove denied this. Morgan put it to him that, given Vallance’s comments and his denial:

you said at the time you were following the science. You can’t be informed and following it, and then ignoring it. It’s either one or the other. You’re either following it, or you’re not.

Fast-forward to Question Time, and Lewis is now saying something different entirely.

Not just a question of words

Words are important. The Cambridge dictionary definition of “informed” is:

having a lot of knowledge or information about something: an informed choice/opinion

It says “led” is the past participle of “lead”, meaning:

to control a group of people, a country, or a situation: I think we’ve chosen the right person to lead the expedition.

So, at the start of the pandemic, the Tories claimed they were led by the science. Then Gove said that scientists were giving the government information, which then gave it knowledge to make decisions.

Now Lewis has returned to the earlier position that the scientists and medical professionals’ advice is controlling the government’s decision making.

Which is it? Because these are two different scenarios, each with potentially different outcomes in terms of accountability. Gove’s “informed” statement places the burden of responsibility for the mess of the pandemic onto the government. But Lewis’ Question Time comment would place any blame at the government adviser’s door. Given the trend of Tory minister’s washing their hands of responsibility for one of the highest coronavirus death rates on the planet, as well as the economic carnage, Lewis deflecting blame is probably the reality of the situation.