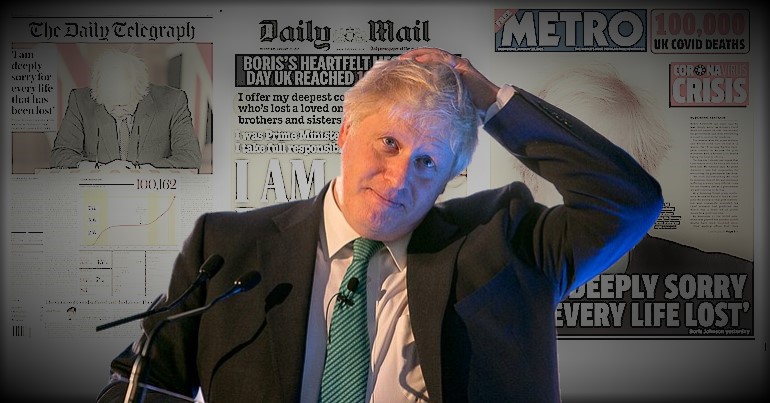 The right-wing establishment corporate media just fell over itself to protect Boris Johnson. Its behaviour is a stain on the UK. And as sociologist Gayle Letherby summed up, these outlets just ‘mocked us and all who grieve’.

Johnson held a press conference on Tuesday 26 January. It came as the number of people who have died from coronavirus (Covid-19) hit over 100,000. The media has widely reported Johnson’s speech. He said of the death toll:

it is hard to compute the sorrow contained in that grim statistic.

The years of life lost, the family gatherings not attended and, for so many relatives, the missed chance even to say goodbye.

But some people were incensed by Johnson’s words. And people were also furious about the much of the media’s response.

The media falls into line

The front pages of many of the papers today are a masterclass in the manufacturing of consent (Chomsky).

Johnson is sorrowful. Johnson cares. Johnson has done his best.

The MSM is not only complicit, it mock us and all who grieve 💔 pic.twitter.com/K3h4kEM9yp

The Telegraph, the Daily Mail and the Metro all ran with Johnson’s “deeply sorry” line; the Daily Mail going so far as to call the PM’s “message” “heartfelt”:

Over at the Express, and it too ran with the “deeply sorry” angle:

In short, much of the media effectively did Johnson’s work for him.

These front pages all pushed his line that he was sorry. But they also worked to somehow paint the Johnson’s disastrous handling of the pandemic as an accident; that they tried their best. As Letherby said:

The MSM [mainstream media]  is not only complicit, it mock[s] us and all who grieve

"We truly did everything we could"

Late lockdowns is perhaps one of the most crucial points. As The Canary previously reported, Johnson’s first lockdown last March was dire compared twith other countries. It noted that:

New Zealand locked down on 25 March; two days after the UK. But as BBC News reported, a week earlier Ardern made everyone coming into the country self-isolate for 14 days. It also completely closed its borders. And as BBC News said, she put “health before the economy”

The Tories’ response to coronavirus has invariably put the economy first and public health second. The “Eat Out to Help Out” scheme shows this best. Because it ended up spreading coronavirus more. As one medic said during an ITV show:

But Julie Harrington also made an important point on Twitter.

The Canary previously reported on the idea of “client journalism” where the government uses reporters for its own agenda. Newspapers presenting Johnson’s “sorrow” as fact is just one example of this. Because actually, his sorrow is a matter of opinion. The media’s skewing of the Tory pandemic response has been toxic, as demonstrated by 27 January’s front pages. So, this ‘manufacturing of consent’ as Noam Chomsky called it is to deflect valid criticism of the Tories away from them. It is the media pushing the interests of the establishment class.

But the public must not let that happen.

Retribution needs to happen. It needs to be swift and unsympathetic. The Tories and Johnson must be held accountable to each of the 100,162 people who have died, and their bereaved families. Anything less will be a catastrophe – much like our government’s handling of this crisis.