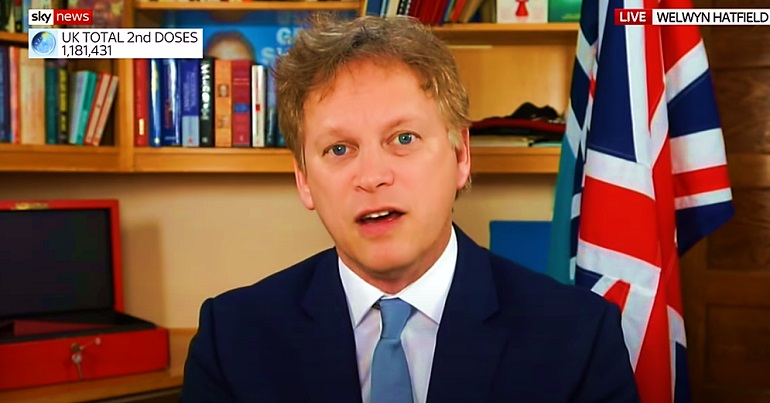 Tory minister Grant Shapps doesn’t have the best record for live TV appearances. But even by his own standards, Wednesday 10 March was a complete disaster. It was over coronavirus (Covid-19) and the UK government’s response.

Shapps was doing the morning TV rounds. On Sky News, he was defending the government’s contentious coronavirus Test and Trace system. Host Niall Paterson put it to Shapps that:

£37bn of taxpayers’ money has been allocated to this system over two years. Can you justify that expenditure?

Of course Shapps could. If he ignored the evidence. The transport secretary said:

Yeah, it certainly hasn’t been cheap fighting coronavirus. But it’s absolutely been necessary. This is quite a strange report. 9.1 million, 9.1 MILLION people have been… contacted by Test and Trace. These are people who otherwise would be wandering around, often unaware that they had coronavirus, and spreading it around further. So, whatever the coronavirus experience we’ve had as a nation, good and bad, it would have been one heck of a lot worse if we didn’t have a Test and Trace system which has contacted so many people and prevented the disease from spreading further.

Niall Paterson – Can you justify £37billion for test and trace?

Grant Shapps – Covid would've been a heck of a lot worse without spending £37billion on test & trace. pic.twitter.com/b2zGLYud5a

Hang on. Would coronavirus have been worse without Test and Trace? Not according to parliament’s spending watchdog.

The Guardian reported on the public accounts committee’s comments on the system. The group’s chair Labour MP Meg Hillier said:

Despite the unimaginable resources thrown at this project, test and trace cannot point to a measurable difference to the progress of the pandemic, and the promise on which this huge expense was justified – avoiding another lockdown – has been broken, twice. British taxpayers cannot be treated by the government like an ATM machine. We need to see a clear plan and costs better controlled.

Also, as The Canary reported, the committee said Test and Trace should:

“wean itself off” reliance on thousands of “expensive” consultants and temporary staff. Some of them have been paid £6,624 per day.

Indeed. Test and Trace may now be working better. And it may have helped stop the spread of coronavirus variants. But last year, it was beset by problems.

For example, other countries have used test and trace systems with high rates of success. Then, the Guardian noted that:

In July, one of the system’s senior civil servants, Alex Cooper, admitted privately the system was only identifying 37% of the people “we really should be finding”.

And it also said:

In the last week of September, the percentage of close contacts reached fell to 68.6% – the lowest level yet

Test and Trace may be a case of ‘too little, too late’. And the huge amount of money paid to private companies is, as Hillier said, “unimaginable”. Shapps flying in the face of not only the evidence but parliament’s own spending watchdog reeks of spin. Problem is, he’s not very good at it. Because 125,000 people have died of coronavirus. So, his claim that without Test and Trace it could have been a “heck of a lot worse” rings hollow.