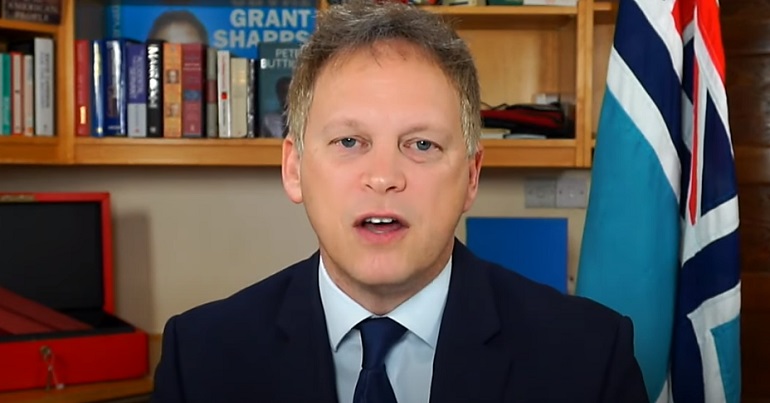 Not content with creating chaos and misery across the country, the Tory government upped the disaster ante on Friday 15 January. Because transport secretary Grant Shapps was sent out to do the breakfast media rounds. Unsurprisingly, his appearances didn’t end well.

It’s been an appalling week for the country. From the news that the government is not providing free school meals vouchers during the February half term, to Jacob Rees-Mogg’s preposterous ‘quip‘ about Brexit-happy fish – the Tories’ sheer negligence and wilful incompetence continues unabated. But far from wanting to address the chaos, the government felt it necessary to impose Shapps on the public first thing in the morning. Like we haven’t all had enough already.

The government has announced several travel bans. These include stopping people from South America and Portugal from coming to the UK. Partly, this is due to a new strain of coronavirus (Covid-19) thought to come from Brazil. Also, as BBC News reported:

From 18 January, most international passengers will have to test negative for coronavirus if they wish to travel to the UK.

Some people have criticised the Tories for being too slow to act; a running theme since the start of the pandemic. So, the transport secretary was across morning media to discuss this. But it didn’t go well.

Stating the obvious. Unless you’re Shapps.

Over on Good Morning Britain (GMB), and co-host Kate Garraway immediately had Shapps on the run. He claimed that:

I’ve looked at the figures, less than one tenth of 1% of all our coronavirus cases are related to people coming to the country

‘Don’t panic! Don’t panic’ you can almost hear Shapps saying in his head. But the problem with this statement is fairly obvious. And Garraway pointed it out to Shapps:

You say that less than 1% of the cases because they’ve got it from abroad. But of course that’s the way it came into the country… in the first place.

D’oh. As the Guardian noted:

In the UK, the first confirmed cases of coronavirus came on 31 January [2020] when two Chinese nationals staying in a hotel in York tested positive.

‘Less than one tenth of 1% are related to people coming to the country.’

Grant Shapps says there is a tiny amount of cases coming into the country.

Kate Garraway challenges the minister that the virus came into the country with just one person and now it is a pandemic. pic.twitter.com/Llu35qrGyM

But on BBC Radio 4 Today, Shapps’ tone was different. He seemed to believe there was a reason to worry. The Today Twitter account tweeted that:

“We don’t want to fall at the last hurdle”… Shapps says “as far as we know” there are no cases of the Brazilian variant in the UK now but there needs to be a “safety first precaution”.

“ Smoothie” Shapps absolutely useless, “ on the ropes” much of Today interview, waffling ( this Govt’s de rigueur) , contradicting himself “quarantine on arrival most important , oh, well maybe not so important, wait a minute, very important, oh, only 25% addresses checked..”

And the final moment of Shapps being “on the ropes” came when Nick Ferrari interviewed him on LBC.

The host asked him:

As a dad, would you book a summer holiday now?

Shapps infamously went on holiday to Spain in 2020. BBC News reported he did this despite knowing that the government was potentially about to bring in a 14-day quarantine rule if people had been abroad. His holiday also coincided with the government advising against all non-essential travel to Spain. So, in this context, Shapps answered Ferrari’s question by saying:

Don’t take advice from me.

Yes. That was the transport secretary literally saying ‘don’t ask me about travelling abroad in the summer’. The man responsible for travel saying ‘don’t ask me what you can do’. A Tory literally washing their hands (pun intended) of their own mess. He even had the gall to say the same thing on the Today programme. You, once again, couldn’t make it up.