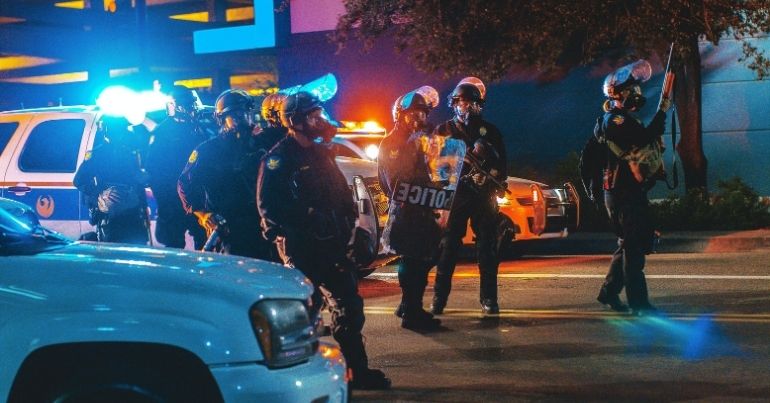 According to CAAT, the College of Policing “has provided training and assistance to at least 76 countries, including many forces that have been accused of torture and other abuses”. CAAT highlights that the college has provided police training for at least 12 countries that the Foreign & Commonwealth Office has listed as “human rights priority countries”, including Saudi Arabia, Bahrain, and Egypt.

The College of Policing doesn’t publish details about the training it provides. However, through a freedom of information request, CAAT found that the college trained forces in 2019 that have been accused of human rights abuses. These include forces in Bahrain, Hong Kong, Nigeria, and Oman.

The countries highlighted by CAAT are also known to buy UK arms, such as the US, where police used British anti-riot equipment to suppress peaceful Black Lives Matter protests in 2020.

Many of these police forces have been accused of torture and other abuses. They use their power to uphold brutal and repressive laws. The UK should not be collaborating with them or strengthening their authoritarian rule.

The killing of George Floyd and the repression that followed drew international attention to state violence. But it is not just an issue in the United States, it is happening all across the world. There must be an end to the hypocrisy and a full review of which police units the UK has trained and if they have been responsible for human rights abuses.

A spokesperson from the College of Policing said:

Before we undertake any international work, we refer to the Joint International Policing Hub (JIPH), which assesses all requests against British values and in the context of maintaining UK security. The International Police Assistance Brief (IPAB) is a process overseen by the JIPH which is made up of policing representatives and those of the Foreign, Commonwealth and Development Office, Home Office and the Ministry of Defence Police.

The College works with various countries around the world and respect for human rights, ethical policing and dignity is an integral part of all of its programmes.