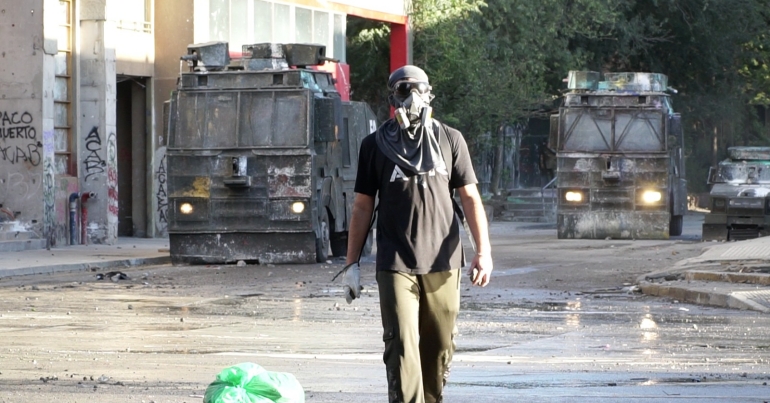 Nick MacWilliam, in conjunction with Alborada Films, is releasing a new documentary this week, Santiago Rising. The film takes place on the streets of Chile’s capital, Santiago, during the social protests of 2019.

Demonstrations began when students jumped turnstiles, taking action at a hike in metro fares. This led to months of mass protests. The spontaneous protests and the spirit of anti-neoliberal rebellion were documented by MacWilliam and the film crew during the transformative events of that year.

The strength and commitment of the Chilean people

Speaking about the film, MacWilliam told The Canary:

I wanted to capture what was happening in Chile and to pay homage to the strength and commitment of the Chilean people. They are taking on neo-liberalism and a militarised state with stones and trumpets. This is a lesson for the rest of the world, we can learn so much from them. There are no political parties coordinating this, yet Chileans are on the street every single day. Independent media networks have been fundamental to the process, as have the medical brigades, musicians, and artists. To witness the sheer scale of how grassroots groups were organising was fascinating.

The protests have led to a push for real change in Chile. Demands to remove the constitution imposed by the Pinochet regime, which enshrined neoliberal policy in law, and replace it with a new one written by the people, are reluctantly currently being enacted by hard-line right-wing president Sebastian Piñera, who made his fortune during the dictatorship. These changes have not come about easily as Chileans have been subjected to torture, imprisonment, and even sexual abuse and death at the hands of the security forces during the uprising.

There were mounted police charging directly at me. One of them (policeman) hit me on the head. I was clearly press of some sort. The tear gas was horrible and there was a real sense of aggression and intimidation. At the Mauricio Fredes memorial I had the feeling they were shooting at the camera to destroy it. They were attacking everybody; at times it was scary, and I saw them using excessive force towards protesters, yet there was a real sense of unity. Men and women (the Primera Linea) fought off the police and formed a human barrier to protect everyone from the violent repression.

Santiago Rising features interviews with protesters, feminists, and independent media, as well as highlighting the role of arts & music during the manifestations:

Art in Chile has been a fundamental means of bringing people together, and spreading ideas and messages. In the Allende era the press wouldn’t carry his message, so the Ramona Parra brigades used murals to promote socialism, human rights and social justice. There’s a long running tradition of using music to express social consciousness. Victor Jara lives on through the movement.

There are screenings of Santiago Rising on 16 and 17 January.