PMQs carnage as Boris Johnson repeatedly loses it - The Canary 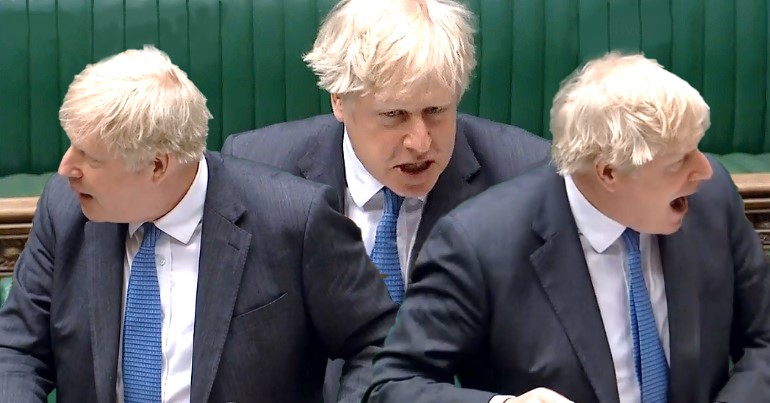 Boris Johnson looked like a man under pressure at Prime Minister’s Questions (PMQs). During the session on Wednesday 28 April, he lost it under pressure from an actually forensic Keir Starmer and a bold Ian Blackford.

Much of the centrist corporate media and commentariat often call the Labour leader “forensic“. Meanwhile, people on the left ridicule this. But 28 April might have been the first time Starmer actually lived up to this description. It’s only taken a year.

Starmer: actually forensic for once

In short, the Labour leader invoked his lawyer background. He picked apart all the corruption allegations and asked very specific questions. Newsnight‘s Lewis Goodall summed up proceedings quite well. He tweeted that:

Starmer: "It was reported this week including in the Daily Mail, BBC and ITV that at the end of October that he'd rather have 'bodied pile high' than implement another lockdown. Can the PM tell the House categorically that he didn't make those remarks?"

Goodall then noted that Johnson came:

out fighting – says that if Starmer wants to make those remarks he should do so having substantiated them and reveal who is saying so.

And as Goodall tweeted:

Starmer clearly trying to set out traps for the future

"The House will have heard the PM's remarks. Someone here isn't telling the truth. I remind him the ministerial code says that ministers who knowingly mislead Parliament will be expected to offer their resignation."

Starmer then moved onto the Downing Street refurb. He repeatedly asked Johnson who ‘initially’ paid for it. The PM repeatedly said he “personally” did. But crucially, as Goodall tweeted:

PM: "I think I've answered this question several times and the answer is I've covered the cost, I've met the requirements I've been asked to meet in full."

Then, Johnson went on a somewhat extraordinary near two-minute rant:

And then, enter the SNP’s Westminster leader Blackford to give the PM even more of a headache.

Regarding the ‘bodies pile high’ comment, he said [ED: all the below from 21:20 onwards]:

Parliamentary rules stop me from saying that the Prime Minister has repeatedly lied to the public over the last week. But can I ask the question: are you a liar, Prime Minister?

Mr Speaker, I leave it to you to judge whether the right honourable gentleman’s remarks were in order

they’re in order, but were not savoury, and not what we would expect.

I’m grateful to you, Mr Speaker.

Blackford’s comment sums up the ridiculous state of affairs in parliament. Because of so-called ‘parliamentary privilege‘, MPs can accuse people of things without the threat of being prosecuted under defamation laws. They can also break court injunctions. As the website allaboutlaw noted, MPs and Lords have sometimes named people at the centre of potential criminal investigations when the media couldn’t.

So, for example a Lord can accuse disgraced businessman Philip Green of “serious and repeated” sexual harassment. But because of other, antiquated parliamentary rules Blackford can’t call the PM a liar.

For once, Starmer and Blackford both had the PM rattled. But how much of it was actual anger from Johnson, and how much was a stage-managed performance? As Green Party MP Caroline Lucas tweeted:

There’s a reason Johnson carefully choreographs his image as casual & sloppy, down to fake ruffling of hair before he goes into #PMQs or on TV – it’s to help give impression his lies are accidental but it’s a script & he knows exactly what he’s doing. And it’s dangerous #R4Today

Whether or not Johnson lost it for real, the truth about the allegations against him and any punishment are still a long way off being known.