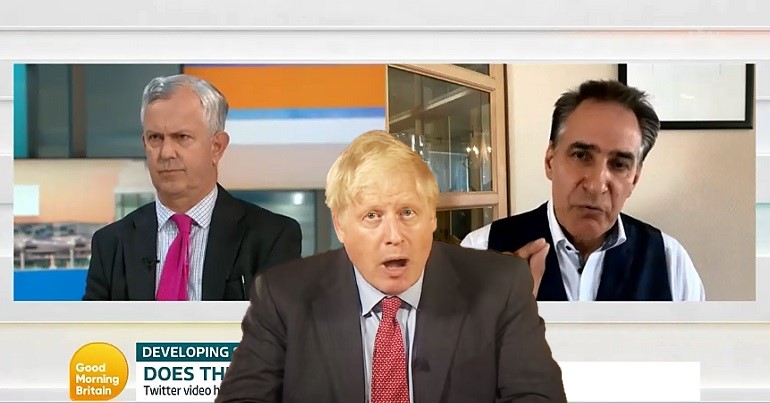 Good Morning Britain (GMB) has finally shown a viral video on the PM’s lies. It’s had over 25 million views. What’s more, GMB got the video’s creator on to talk about it. And he was adamant that, despite what some people say, the public do care about the PM’s “rampant” lying.

Blatant fact: Johnson is a liar

Peter Stefanovic is a campaigning lawyer. He’s been vocal on issues surrounding the NHS, disability rights, and others. Recently, a video he produced has gone viral. It’s about Boris Johnson’s lies to parliament. As of 11am on Wednesday 7 July, it’s had over 25 millions views on Twitter alone. As Bywire News reported, the video started a cross-parliamentary campaign. It called for an inquiry into Johnson’s lies. Every opposition party got involved, except Labour. Bywire noted that Johnson’s untruths included:

Claim 5: On the 17th of June 2020, during PMQs [Prime Minister’s Questions], the Prime Minister said “There are hundreds of thousands, I think 400,000, fewer families living in poverty now than there were in 2010”.

This is not true. A parliamentary watchdog already issued Johnson with a warning over his previous lies about poverty. But so far, much of the corporate media has ignored Stefanovic’s video – and Johnson’s lies. As The Canary previously reported, sometimes BBC hosts even actively try to shut down mentions of Johnson’s fibs. So, enter GMB to give Stefanovic and his video a platform:

Huge thanks to @susannareid100 @campbellclaret & @GMB for being the VERY FIRST UK news show to have the courage to step up & actually screen & debate my film today, now on 25 MILLION VIEWS pic.twitter.com/4KicfqB7Mo

Stefanovic said that compared to Johnson, his video was accurate with its claims:

Everything that I said in my film has been carefully fact checked by various sources. And so what the prime minister is saying there is provably false.

'A public protest at the outright lies.'

So does the truth matter in politics? pic.twitter.com/QD98kGK3fe

He was also debating the issue with Johnson’s biographer Andrew Gimson. He tried to defend Johnson. But as Stefanovic pointed out:

There are going to be different people interpreting this film in different ways. So, you’re going to have some people looking at it as I do, and say ‘well – this prime minister is telling bare-faced lies every week’.

you’re going to have some people looking at the film saying ‘well, the prime minister simply hasn’t got a clue what’s going on in the country’

Reid also put it to him that the public may not care that Johnson lies. But as Stefanovic said, the reaction on social media to his video meant:

As Stefanovic summed up, saying of his late parents:

Indeed. So, now we wait to see if the BBC will follow GMB‘s lead.

Watch the full GMB segment below: