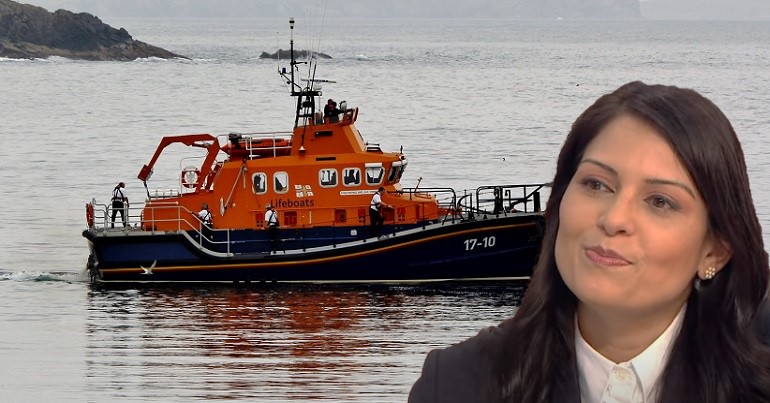 The Nationality and Borders Bill

The Nationality and Borders Bill [entered] parliament on 6 July. The Home Office said its reforms will make it harder for people who enter the UK ‘illegally’ to stay.

Patel said the new bill will change our “broken asylum system”, stopping gangs from facilitating illegal journeys to the UK. She added it will further streamline the removal of “those with no right to be here”.

You can read Jasmine Norden’s analysis of the bill here. As she wrote:

The proposals in this bill serve to harm refugees desperately in need of safety. They will make it harder for them to gain asylum and criminalise them for trying to escape danger.

And there’s one bit of the bill which is causing a fresh outcry.

Unbelievably, the government’s immigration and asylum bill criminalises the RNLI saving asylum seekers at peril in the English Channel. As a life governor of the RNLI I am deeply shocked https://t.co/VgT4hQcXIr via @freemovementlaw

This seems to be a distinct possibility. As Colin Yeo wrote for freemovement, Patel is changing the law on helping asylum seekers getting into the UK. Previously, if a person “facilitates” this, it would only be illegal if it was for that person’s “gain”. But Patel wants to remove the word “gain”. So, as Yeo summed up:

While someone working for an organisation that “aims to assist asylum-seekers” cannot be charged with this offence, someone who works for a more general-purpose charity like the RNLI and who helps an asylum seeker enter the UK may, on the face of it, be criminalised by this change.

The bill is currently at an early stage in its passage through parliament. This means it’s not yet clear what the implications are for charities like RNLI. George Peretz QC explained:

One aspect of this clause is that the RNLI would appear to be guilty of an offence if they rescue a boatload of people obviously seeking illegal entry and bring them safely to shore. https://t.co/lI7CY5qM3M

This is, I’d guess, a mess-up – of the type familiar to anyone who’s ever been involved in a complex Bill – rather than deliberate. But what Ministers decide not to focus on tells you as much about them as what they do decide to focus on.

More readings of the bill are still to come. However, the suggestion that the state could prosecute a charity whose sole purpose is saving lives on the water – for doing just that – is very troubling. The maximum sentence for this is life imprisonment.

I have been a long time supporter of the RNLI… I am deeply shocked by this move… to find that saving the life of an asylum seeker is now to be criminalised is profoundly shocking. What sort of mentality is required to create such a possibility?

But as Daniel Sohege said on Twitter, who else could the Tories prosecute for rescuing drowning asylum seekers?

Removing "for gain" implies a serious proposition by the Home Secretary to prosecute not only the RNLI, as others have already said, but also anybody rescuing drowning asylum seekers at sea, in clear contravention of international law and basic humanity.https://t.co/bGGjPwanao. https://t.co/nwr5x6lw0U

Will removing the "for gain" clause for helping Asylum Seekers enter the UK, put the RNLI, NGOs or boat skippers at risk of prosecution unless clauses are added?@BarristerSecret pic.twitter.com/r9QMQSXgRS

The RNLI had already faced abuse from the far-right. Nigel Farage recently called it a “taxi service for illegal immigration”. The Daily Mail then ran a story on his claim. But the charity is not having it. It said in a statement on Twitter:

Our lifeboats operate under international maritime law, which states we are permitted and indeed obligated to enter the waters of other territories for search and rescue purposes.

Where we believe there is a risk to life at sea, we will always launch.

So, first Farage and now our far-right government are demonising refugees and asylum seekers so much they’re apparently willing to criminalise one of the most well-known charities in the country. When he was London mayor, Boris Johnson supported the RNLI. How the political wind changes.