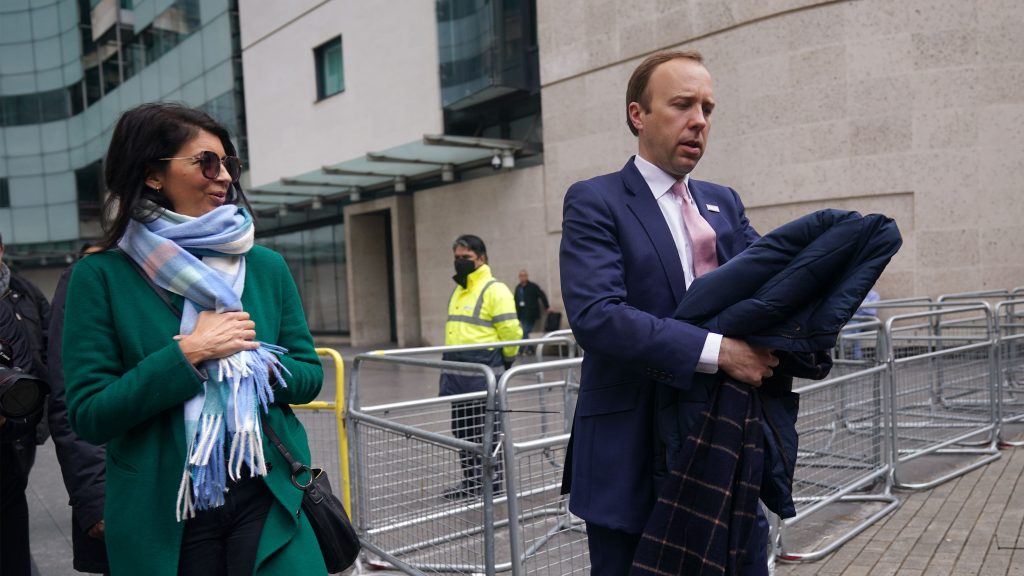 Pressure is mounting on Health Minister lord James Bethell following the launch of two official investigations in which he is expected to feature.

The Information Commissioner Elizabeth Denham announced she is mounting a formal inquiry into the use of private correspondence channels in the Department of Health and Social Care (DHSC).

At the same time, the Lords Commissioner for Standards is investigating a complaint that the peer sponsored a parliamentary pass for the aide Hancock was caught kissing on leaked CCTV footage.

Hancock’s embrace with Gina Coladangelo ultimately cost him his Government job after he admitted they had breached social-distancing rules.

In a blog posted on the Information Commissioner’s Office’s (ICO) website, Denham said the use of private communications channels was not in itself a breach of freedom of information or data protection rules.

However she said she was concerned that they could be used to frustrate the freedom of information process.

My worry is that information in private email accounts or messaging services is forgotten, overlooked, autodeleted or otherwise not available when a freedom of information request is later made.”

That is why my office has launched a formal investigation into the use of private correspondence channels at the Department for Health and Social Care, and has served information notices on the department and others to preserve evidence relevant to my inquiry.

She added that the ICO had the option of bringing criminal prosecutions against individuals if information was “deliberately destroyed, altered, or concealed” after it has been requested under the Freedom of Information Act.

I will follow the evidence in this investigation where it leads and use all the powers available to me to ensure a full understanding of what has happened.

Downing Street has previously acknowledged that Bethell used a private email address but suggested that was allowed within the rules, while the minister has insisted he did nothing wrong.

Meanwhile a House of Lords spokesman has said the Commissioner for Standards was investigating a complaint regarding Bethell’s sponsorship of a pass for Coladangelo.

A long-term friend of Hancock, Coladangelo was brought into the DHSC first as an unpaid adviser before being made a non-executive directors receiving £15,000-a-year for three days work.

Members of the House of Lords can sponsor passes for secretaries and research assistants if they “genuinely and personally” fulfil those roles for the sponsoring member.

The sponsor has to sign a declaration to that effect, and it would be against the rules if the individual did not work for the peer.

Passholders have free access to the Palace of Westminster, where they can mingle with ministers and MPs and use the estate’s facilities such as bars and restaurants.

Coladangelo is no longer listed as a member of staff for Bethell on his parliamentary web page.

But an online archive showed she was listed as a staff member in May last year as “Mrs Gina Tress”, a marketing and communications director for Oliver Bonas, the retailer founded by her husband, Oliver Tress.”