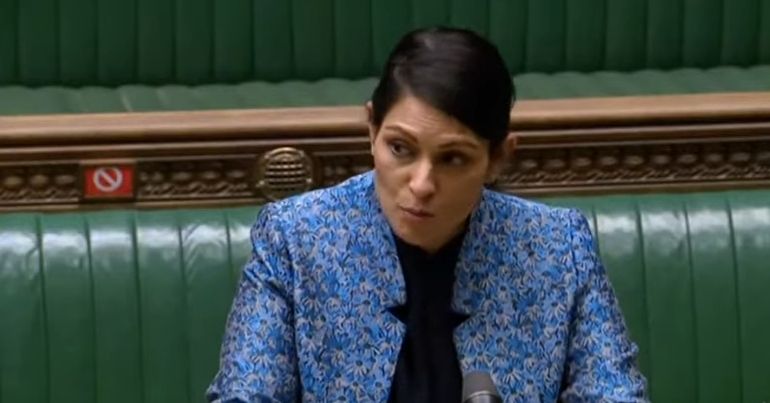 Priti Patel is set to reveal a new bill shaking up immigration laws to criminalise people arriving in the UK without prior permission.

The Nationality and Borders Bill enters parliament on 6 July. The Home Office said its reforms will make it harder for people who enter the UK ‘illegally’ to stay.

Patel said the new bill will change our “broken asylum system”, stopping gangs from facilitating illegal journeys to the UK. She added it will further streamline the removal of “those with no right to be here”.

Immigration and refugee campaigners say the new reforms could leave thousands seeking safety turned away, and accused the bill of ‘criminalising’ refugees.

Tomorrow the Gov will publish its #AntiRefugeeBill.

As the Home Secretary does her media rounds, listen carefully to what she says.

Is she asking how we keep people safe?

Or how we keep people out?@RefugeeAction we will always be focused on the former.#StandUpForAsylum pic.twitter.com/4ojIm2JQSb

The bill is set to introduce a new definition of ‘entering’ the UK, which is likely to make it easier to prosecute migrants intercepted in UK waters.

Refugees travelling into the country via ‘unofficial means’ could face up to four years in prison – the current maximum sentence is six months.

It will further introduce a maximum life sentence for ‘people-smugglers’ and new age assessments. It will also downgrade status for asylum seekers the government isn’t able to deport to a ‘safe country’.

The new law would also allow the government to remove asylum seekers to offshore centres while their appeals are processed.

According to the Refugee Council’s analysis, the reforms could mean up to 21,600 people each year that would currently be accepted as refugees would no longer be due to how they arrive.

Today this government is cruelly choosing to not only turn away those in need of safety but also treat them as criminals.

This anti-refugee Bill will drive an already inefficient and ineffective system into disarray with even worse delays and far greater expense.

The British Red Cross said they had “major concerns” with the bill. The charity said it would mean asylum seekers’ cases would be decided based on “how they entered the country”. This would be instead of their need for protection.

People seeking asylum have been through some of the worst horrors imaginable, and their search for safety is often long and arduous. Many people spend years internally displaced in their own country, before making journeys to other places to seek safety. Even then, people are often forced to keep moving on due to violence, overcrowded refugee camps or being unable to access asylum systems.

If Global Britain is truly to be a force for good, we need to lead by example. That means making changes to our own asylum system towards a compassionate approach to people seeking refuge here, and looking outside our borders for opportunities for lasting change.

The effect on asylum seekers

According to watchdog the Independent Monitoring Board, the Home Office’s plan to quickly deport asylum seekers in 2020 led to a huge increase in the number of people at risk of suicide.

From July to December 2020, the Home Office operated several deportation flights. Officials placed one-third of all the people detained at Brook House Removal Centre on suicide watch during this time.

Shadow home secretary Nick Thomas-Symonds said the bill does nothing to deal with the “chaos” created by the Conservatives’ immigration policy. He added that it doesn’t:

deal with the fact that the time taken to process claims has rocketed or desperate people are still falling victim to criminal gangs. Instead, they will reduce support for victims of human trafficking, potentially break international law, and there are still no effective, meaningful proposals to deal with the increasing number of people risking their lives crossing the Channel.

In March, Patel insisted that the proposals do not break international law.

The proposals in this bill serve to harm refugees desperately in need of safety. They will make it harder for them to gain asylum and criminalise them for trying to escape danger.

The proposals do the opposite of fixing our ‘broken asylum system’ and are likely to lead only to more chaos.