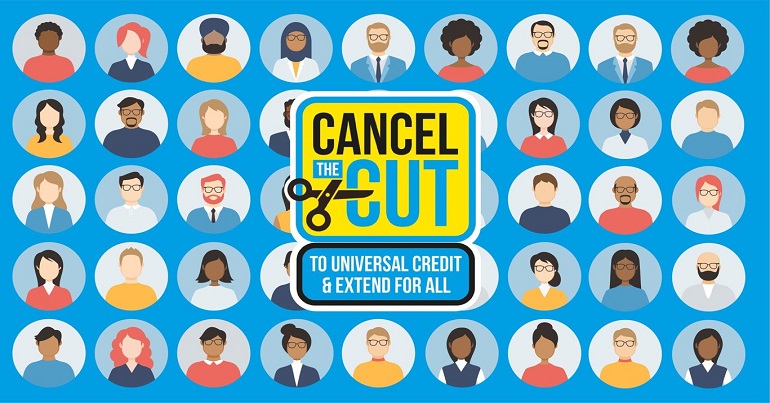 The Tories’ cut to Universal Credit was at the front of many people’s minds on Wednesday 14 July. A campaigning trade union group had organised a day of action across the UK on the 14th.

The Canary has been covering Universal Credit during the coronavirus (Covid-19) pandemic. There’s been a lot of debate about the £20 a week uplift. In April 2020, the DWP increased the rate of Universal Credit by this amount. Then, the chancellor Rishi Sunak confirmed in his Budget on Wednesday 3 March 2021 that the DWP would keep the £20 uplift. But as the Mirror pointed out, 6 million people still faced a:

This is because Sunak and the DWP have only put the £20 increase in place until September 2021.

The Canary previously reported on how some research called the £20 uplift “inadequate” anyway. It found that people were still financially struggling on Universal Credit. This was even with the extra money. Now, the government has also released the latest inflation figures. The cost of goods and services, driven by increases to things like food, rose by 2.5% year-on-year in June. This may well mean that the £20 uplift is now worth less than it was in April 2020.

Unite against the cut

Unite Community is a division of Unite the Union. It’s been taking action against the Tories’ and DWP’s £20 cut. The group said on Facebook:

A warm home and food are not luxuries but for the six million people who rely on Universal Credit to get by, it’s literally the difference between eating and heating.

Unite Community organised leafleting sessions and street stalls across the UK. And people took to social media to call out the Tories’ action.

People were posting using #KeepTheUplift and #CancelTheCut. A Mirror journalist got involved:

Love this from Unite Community.
One of the most pernicious cuts of all, & just the start of a new stealth austerity, done with a winning smile from the Chancellor.
After years of anti-welfare rhetoric, street stalls a great way to explain what UC cut really means#CancelTheCut https://t.co/cYjNtXUkwE

So did several Labour MPs:

The £20 Universal Credit income boost is paying for basics like food and heating, not luxuries.

The £20 Universal Credit uplift has meant the difference between having to choose between heating and eating for so many.

I am supporting @Unite_Community’s campaign to #CanceltheCut to UC and extend it to all claimants.

When I left my husband and had my first baby last year, I went on benefits for the first time in my life. The £20 uplift has massively helped me and my premature daughter to be able to live! #keeptheuplift https://t.co/ebyXf3MD0h

People also used #20MoreForAll. This is because 2.2 million people still claim so-called ‘legacy benefits’. These include Employment and Support Allowance (ESA). Three-quarters of these claimants are disabled people. And the government has not increased their social security payments in line with the Universal Credit uplift.

Sunak and the DWP’s £20 a week cut will further entrench deprivation in the UK. As The Canary has documented, inequality and poverty have got worse since March last year. For example:

Now, the Tories seem hell-bent on making matters worse. The opposition to this needs to be strong and vocal. And Unite Community’s day of action served as an important part of the fight.

Unite Community and the union have launched a petition. You can read and sign it here. It calls on the Tories to cancel the cut and uplift legacy benefits, too. You can also write to your MP via the same link. And you can share your story about the DWP and social security with the groups, too.