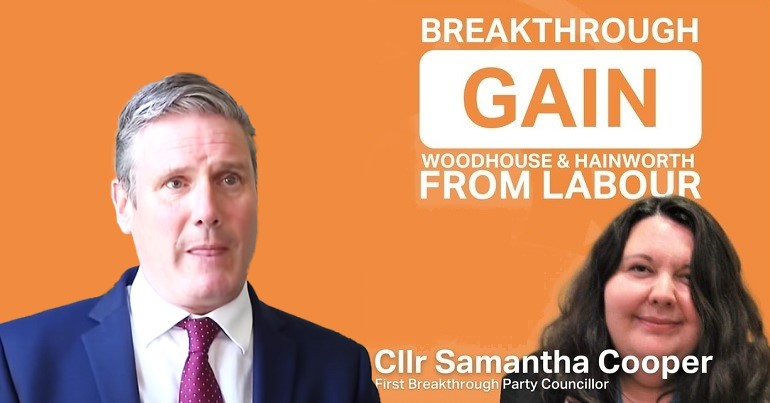 A Labour councillor has defected to an up-and-coming political party. The move may not be a surprise given Keir Starmer’s woeful leadership. But it does show how the new political party is already resonating with people.

As The Canary previously reported, the Breakthrough Party launched in January 2021. Alex Mays founded it. You can read all about Breakthrough here. But as Mays told The Canary:

Now, Breakthrough has got its first councillor.

As it tweeted, Labour has lost a councillor to it in West Yorkshire:

🚨WE HAVE OUR FIRST COUNCILLOR🚨

🟠🌤 A big welcome to Keighley town councillor Samantha Cooper, who has defected from the Labour Party to join Breakthrough.#TimeToBreakthrough

Cooper is a councillor for the Woodhouse and Hainworth ward. She said in a press release that:

Under the new leadership, the Labour Party has turned its back on the people I was elected to represent and I can no longer look them in the eye while remaining in the Party.

There are some truly good people in Labour and those people will always have my respect. But as a primary school teacher and mother of two young children, I can’t watch the Party walk back on its support for the trade unions, on its proud and unwavering support for the most vulnerable groups in our society, at the same time keeping MPs who ally themselves with those who make the world more dangerous for people I love.

As a teacher, I asked my party for solidarity during the pandemic, in a time when our union had never needed support more. I didn’t get it.

Ouch. And Cooper’s defection also shows just how disaffected some people are becoming with Labour – even those with family history in the party.

My mum used to leaflet for the Labour Party as a child with my Grandad. He was a miner, and a conscripted soldier. Old school Labour Party! I used to dream of becoming a Labour MP and taking his photo with me to parliament.

I joined Labour because I believed that they had the backs of people like the miners and the unions. My grandad made sure I joined the union when I got into teaching. ‘Stick with your union and they’ll see you right,’ he would say.

So, Breakthrough has got its first councillor – and it’s at Labour’s loss. The stance of this new party clearly moved Cooper. The question now is who’ll be next to give Starmer another political headache?