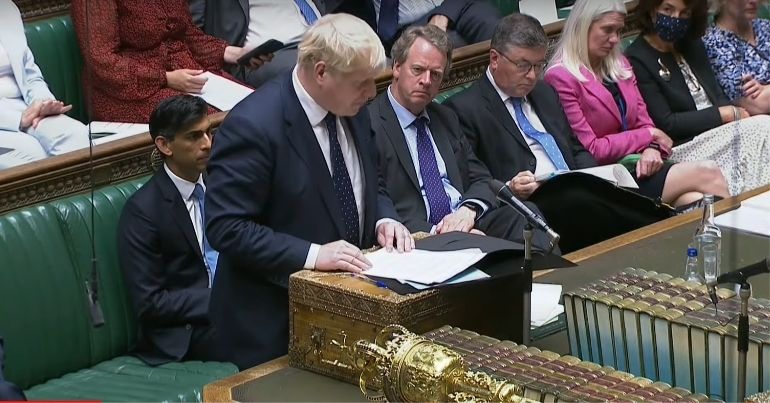 The prime minister has been met with criticism across the political spectrum after he unveiled his plans to fix social care.

In a speech to parliament, Boris Johnson announced new plans to increase funding for the social care system and integrate it with healthcare.

Controversially, the main part of the plan will see national insurance rise by 1.25% from April 2022. This rise will eventually be renamed as the health and social care levy in 2023.

The plans had already been criticised by many before the formal announcement as unfairly hitting low paid workers.

Unfairness at heart of Johnson’s social care bodge up. No matter what it’s called increasing National Insurance is a tax rise with heaviest burden falling on working people & failure to level up dividend income tax rates with earned income continues to protect the wealthiest.

Welcome to Tory Britain where someone struggling in a low paid job about to lose £20 a week Universal Credit and a nurse using a food-bank will have to pay for social care.

Someone who's wealthy and retired or who earns their living as a landlord won't.

There will be a cap of £86,000 on the amount anyone has to pay for social care in their lifetime.

BREAKING: I understand care plan is as follows…

Reaction from carers we are filming with in Wiltshire…

“Yet again we are the secondary service”

“I’m deflated. What was Boris Johnson clapping for?”

At the company we are filming at they’ve had 2 people apply for care jobs in 12 weeks. Will today’s funding really change that?

As well as the increase in national insurance contributions, there will also be a 1.25% increase in dividends tax from April 2022.

Johnson announced that £12bn will be raised over three years from the tax increases that will go the NHS to help catch up on the huge backlog caused by the pandemic. Around £5.4bn will go to social care, though the government has claimed social care will receive more once the NHS backlog is cleared.

Taxes should be raised on the wealth of the super-rich, not the labour of the poor.

I’m over 66 and so are many of my Parliamentary colleagues. As MPs we earn a very good salary & yet as pensioners we pay no National Insurance contributions.

It is deeply unfair that our generation should benefit from the mooted Tory social care policy & not contribute.

Politicians and campaigners have criticised the plans for increasing taxes on the lowest paid workers. Instead, many are calling for a wealth tax to fund social care by taxing the richest.

Furthermore, some health organisations have warned “realism” is needed in interpreting the money social care will get.

Richard Murray, chief executive of The King’s Fund, warned that the cap on care costs will take most of the funding social care receives, while helping “relatively few people” at £86,000.

He added that there may not be enough money left over to address problems with workforce, care quality and access.

The crisis in social care can't be fixed by the Tories unfair proposals.

We need a National Care Service for all, funded by progressive taxation, including a wealth tax.

A Wealth Tax is how we should fund much-needed investment in social care – not a hike in National Insurance contributions that will hit the lowest paid.

While the funding plans have been controversial, many have been calling for proposals to help social care.

Charities have been saying the social care system was “decimated by coronavirus“. Age UK recently launched an appeal to campaign for the government to do something to plug the gaps. According to the charity, successive governments have cut social care spending by £86m since 2010.

It also raises local authority service cuts and regional variation in services as huge issues. This has resulted in 1.5m people over 65 living without the support and care they need.

Many disabled people are also living without proper support and struggling with huge costs.

Care workers, on an average of £8.82 phr, are about to be taxed more in order to contribute towards the cost of the care they provide. That the reality of choosing a national insurance rise over wealth taxes.

The new #socialcare levy would be better funded through income tax or by wealth taxation, explains @GeorgeDibb pic.twitter.com/ePUWfoaGOT