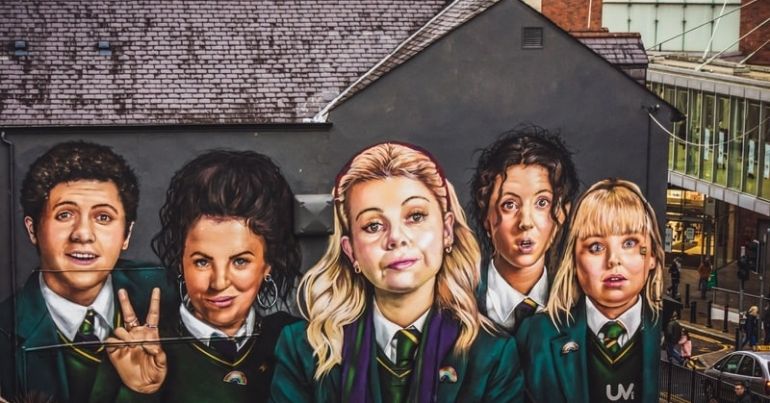 Tory ministers want new laws to ensure TV is adequately British. The rules will force Ofcom to police the levels of Britishness on TV. But there’s a problem. One of the examples they give is Derry Girls. That’s right, a show about a group of proudly Irish Catholic schoolgirls negotiating adolescence in the midst of British military occupation.

Other acceptably ‘British’ shows include Only Fools and Horses, Fleabag and the Carry On films. Tory media minister John Whittingdale told the Royal Television Society conference that Dr Who and, unsurprisingly, Downton Abbey were also acceptable.

Needless to say, the new Tory plans have brought the best out of Twitter. One user challenged the Tories to own up to their fears:

‘Britishness’ equates to centering Whiteness (& all it embodies) into all broadcasting programs produced but….that is the NORM.

Why doesn’t Boris Johnson Govt tell us what it’s really afraid of?

This is a whitewash to ensure Black/Brown talent/diverse UK cultures are silenced. https://t.co/Evce1eG5LW

While another pointed out that the Tories always had cash to splash, unless it involved keeping people alive:

Good to see that at a time when the Tories are ruthlessly slashing universal credit support for the poorest, they do still have enough spare cash to invest in the important area of *checks notes* ensuring adequate Britishness in all TV shows.#priorities #Britishness pic.twitter.com/ocDhmF4mOg

Another said the very idea sent a shiver down her spine:

Real shivers down the spine moment reading this: ‘We will talk to Ofcom about how to make the obligation of Britishness work.’ – John Whittingdale, Minister for Media and Data https://t.co/U1NVm8l3ka

While @peacockpete reminded us that UK TV has often been extremely diverse and thus very un-Tory anyway. Like the hit show Desmond’s – about a Black British barber shop – and Julian Clary’s long-running comedy series.

Personally I welcome this return to more Britishness on TV pic.twitter.com/WtWNZ1d0E1

But Twitter user @oscardebird might have hit the nail on the head. For the Tories, ‘Britishness’ mostly means ‘Englishness’.

When they say “Britishness” they mean Englishness.

And in the context of their bigoted culture war, we know what Tories want us to watch on TV. It needs to be mostly white, straight and cliched. And patriotic if at all possible. And that’s why entertainment and culture which challenges these notions is so important.