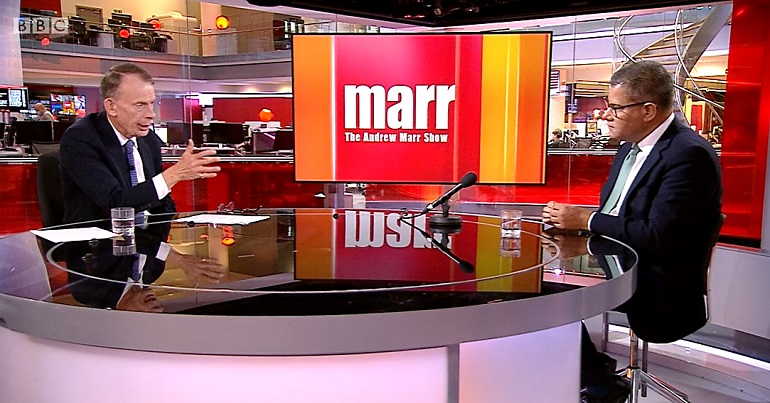 A Tory MP told the Andrew Marr Show that government policies were ‘protecting people’ from potential huge rises in gas prices. Of course, what he didn’t mention was his party’s other policies that were already plunging people into poverty.

As The Canary previously reported, gas prices look set to go through the roof. Dermot Nolan, former head of the regulator Ofgem, warned that Britain is likely to face high energy prices for the rest of 2021. Nolan is a former Ofgem chief executive. He said the increases were the result of depleted stocks following a cold winter in 2020, reduced supply from Russia, and increased demand for liquefied natural gas from East Asia.

It is not obvious to me what can be done in the very short run. Britain does have secure relatively diverse sources of gas, so I think the lights will stay on. But I am afraid it is likely in my view that high gas and high electricity prices will be sustained for the next three to four months.

It is very difficult to see what the Government can do directly in this regard.

Meanwhile, business secretary Kwasi Kwarteng held talks with industry bigwigs over the potential price rises. So, what does Tory MP and president of the UN Climate Change Conference (COP26) Alok Sharma think about the situation? On the Andrew Marr Show on Sunday 19 September, Sharma told us all not to worry.

Marr asked Sharma if people should be worried about the “eye-watering increase in gas prices”. Of course, Sharma thought not. He said:

we have the Energy Price Cap; we have the Warm Homes Discount – to protect people at this particular time.

How worried should people be by gas price rises?

"We have the energy price cap, we have the warm homes discount to protect people at this time" says COP26 President Alok Sharma
https://t.co/DEz4awFvtv #Marr pic.twitter.com/AfMsgvm6qg

Of course, this is easy for Sharma to say. Because he won’t suffer from a Tory triple whammy of other measures that will make poor people even poorer, and therefore struggle even more to heat their homes or cook meals with gas.

The Tories are also planning to increase National Insurance by 1.25%. This is to fund health and social care. But as the Big Issue wrote, experts say this will hit young and low-paid workers the hardest – including around 2.5 million working households who are also going to be hit by the Universal Credit cut.

To top it off, inflation (the rate at which prices of goods and services rise or fall) has rocketed. As Reuters reported:

official data showed a record month-on-month jump in the annual rate of consumer price inflation, which surged to a nine-year high of 3.2% in August – far above the BoE’s [Bank of England’s] 2% target.

It said that when energy price rises hit, inflation could jump as high as 4% later this year.

So, while Sharma tries to convince us that the Tories’ are making sure the gas price rises won’t affect people too much, the reality is very different. With cuts, tax hikes, and price rises all set to cause financial chaos for millions of people, a big rise in gas prices may be too much for many.