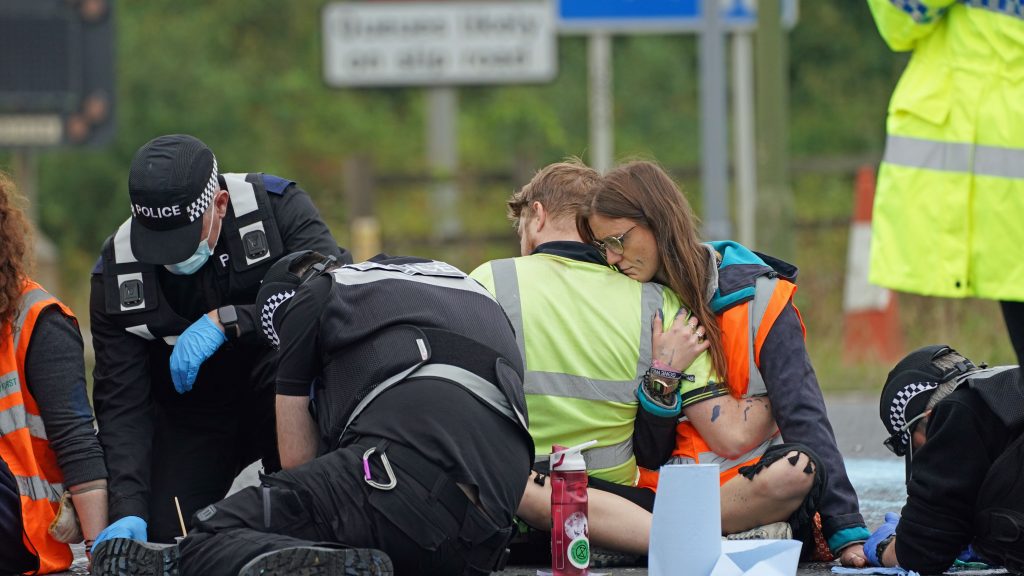 A total of 29 people have been arrested after environmental protesters glued themselves to the carriageway of the M25 in Hertfordshire.

Members of Insulate Britain confirmed they blocked slip roads in a “number” of locations and poured paint on to the roads as part of their campaign to improve home insulation. They added that many of the people involved in the protests on 20 September have previously been involved in four other similar demonstrations which took place last week across junctions in Kent, Essex, and Surrey.

Hertfordshire Constabulary were called to junction 18 (Chorleywood) of the motorway at 8.12am and found “several” protesters glued to the carriageway. They arrested 13 people and the road has been partially reopened.

Officers were called again three minutes later to reports of protesters near junction four, the Stanborough Interchange, of the A1M. A total of 16 people have been arrested, the majority of which were glued to the carriageway. A diversion is in place.

Images taken at the scene show people being searched and blue paint splattered across the road, with the words “Insulate Britain” and a heart painted.

CCTV motorway traffic cameras of the M25 anticlockwise at J18, the Amersham and Watford turn-off, showed traffic piling up across the three lanes shortly before 8.40am. Chief superintendent Nick Caveney said:

Protesters have made it clear that they intend to continue causing disruption. Not only is purposely blocking a highway incredibly dangerous, it also affects thousands of members of the public who are stuck in delays as a result.

We have now made a total of 76 arrests in relation to protest activity across Hertfordshire over the last week. Please be assured that a full investigation is under way and we are in the process of gathering evidence in order to ensure that those breaking the law are brought to justice.

A statement from the group said:

Early this morning, Insulate Britain blocked the M25 for a fourth time. Actions will continue until the Government makes a meaningful commitment to insulate all of Britain’s 29 million leaky homes by 2030, and all social housing by 2025.

People blocked slip roads and the M25 carriageway itself in a number of locations. Once again, blue paint was poured onto the road, which will require cleaning, leading to further disruption.

Many of those blocking the roads today have participated in all four actions to date.

The group wrote to National Highways and the police on 19 September to urge for speed limits to be reduced and to alert them to the action on 20 September.