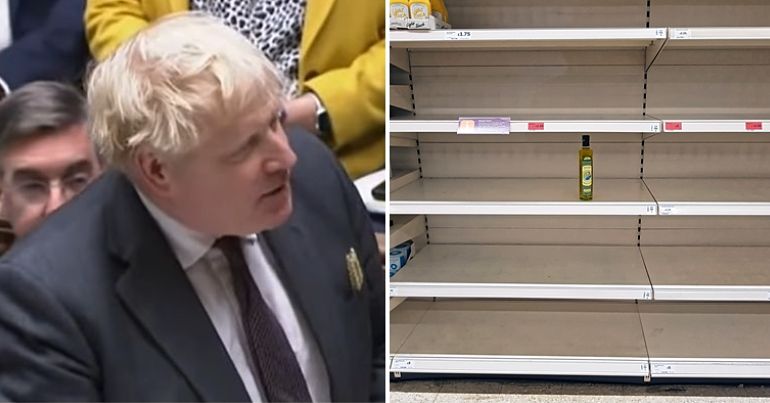 People are criticising the government for the “chaos” caused by Brexit as companies warn of food shortages.

Brexit has been blamed for there not being enough HGV drivers to maintain supermarket supply chains. This is compounded by a global hike in gas prices, which has led to a shortage of carbon dioxide. The gas is used to refrigerate and deliver frozen products to supermarkets.

The result leaves the country facing a shortage of frozen meals in supermarkets, as well as affecting products like cheese and salad.

#BrexitFoodShortages #ToryShambles I cried today. In the car by the Co-Op. it was a quiet time when elderly shoppers get their supplies. Several wandering looking bewildered + confused No fresh goods, no ready meals. What have we become?
Shame on you Johnson. Shame on your govt. pic.twitter.com/6M5VkMdJd2

We are very short of drivers, it’s a combination of many EU drivers having decided to go home and also the ageing age-profile.

I think certainly Brexit has been a contributor to that but also improving economies, higher wages in some of the countries that they’ve come from historically, have also led to that flow.

Allan said that the shortage of drivers meant Tesco has not been able to build the stock it normally does ahead of Christmas.

Several other chains have been impacted by food shortages. Poultry producer Avaro Foods also blamed Brexit for hurting supply chains, as did the chief exec of the British Meat Processors Association, the Co-Op, and Iceland.

#BrexitChaos – How it Started vs How It's Going 🤦‍♂️ pic.twitter.com/aCp4INjUF0

In August, gas prices increased by over 70% with some estimates saying households could see a rise of their energy bills by £400 in a year.

The increases are in part due to a cold 2020 winter depleting gas stores, according to former Ofgem chief exec Dermot Nolan.

The gas price increase has already shut down two UK fertiliser plants which produce carbon dioxide as a by-product. This shortage in carbon dioxide has complicated the already existing food shortages.

Granted, it’s not the only factor but the self harm of #brexitreality is even now recognised in the mail. #BrexitFoodShortages #BrexitIsNotWorking pic.twitter.com/w0xgchubeD

As a result, people are blaming Brexit and the government for the food shortages. According to the results of a new poll, over half of the respondents believed that Brexit has ‘created more problems than it’s solved’.

Am I allowed to say “I fucking told you so”?#BrexitChaos