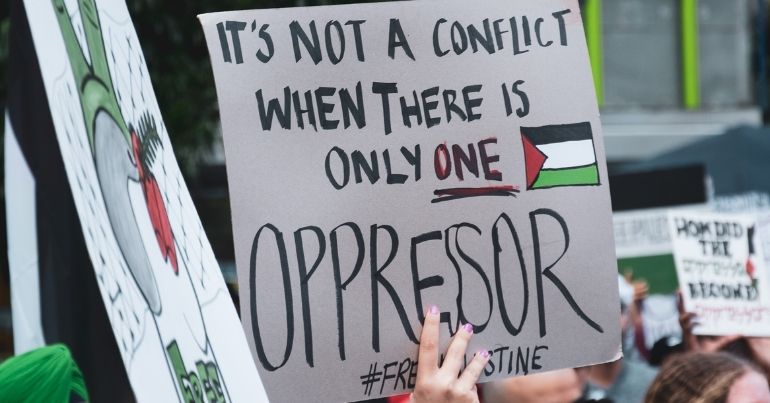 On Thursday 13 January, campaigners announced that – after years of campaigning and direct action – Elbit Systems will be closing its arms factory in Oldham. Three activists who took direct action against the factory are due to appear in court on 20 and 21 January. Campaigners are calling on allies to show their support outside the courtroom. And in London, campaigners are planning a Palestine solidarity protest against ongoing ethnic cleansing in Sheikh Jarrah on Friday 21 January.

As The Canary‘s Tom Anderson reported, Elbit has decided to close its arms factory in Oldham. This comes after years of local and international campaigns and direct action against the company.

In order to appeal to repressive governments around the world, Elbit Systems markets its weapons and surveillance technologies as “battle-tested” and “field-proven”. Indeed, it is Israel’s largest private arms company, manufacturing 85% of the drones used to kill Palestinian civilians in Gaza.

In 2013, a Palestinian man from Gaza whose daughter was killed by an Israeli airstrike told Anderson:

Campaigners must prevent these Israeli war crimes that kill our dreams and kill our children. When will it stop?

And in May 2021, while Palestine Action activists were campaigning to shut down Elbit factories in the UK, Israeli forces were engaged in an 11 day air strike on Gaza. According to the United Nations, these strikes killed at least 256 Palestinians.

PASS IT ON, COPY/PASTE:

Ethnic cleansing in Sheikh Jarrah, the Naqab, Massafer Yatta & across Palestine is escalating.

What you do & say now about what's happening in Palestine will go down in history. Silence & action in these moments equal complicity. #SaveSheikhJarrah

The closure of Elbit’s Oldham factory represents a symbolic victory in the fight to end British complicity and support for Israel’s violence against Palestinians.

On Thursday 20 January, a judge dismissed the case of three Palestine Action activists who were on trial for occupying the landlord responsible for Elbit’s Shenstone factory. Celebrating the news, Palestine Action shared:

Breaking: Case against 3 Palestine Action activists THROWN OUT by judge in another humiliation for Elbit. Activists who occupied offices of the property managers of Elbit's Shenstone death factory WALK FREE, again defeating Elbit in our second ever trial. More details to follow pic.twitter.com/Uy9GLdmokH

All out tomorrow to support 3 great activists who helped get Elbit Arms factory out of Oldham, for a court hearing in Ashton Under Lyne, OL6 7TP 20th January Tameside Magistrates Court 1.30pm pic.twitter.com/F8XfnyvbYf

Meanwhile, campaigners plan to demonstrate against ethnic cleansing which continues unabated in the Palestinian village of Sheikh Jarrah on Friday 21 January. Sharing details of the upcoming protest, Shabbir Lakha tweeted:

What Israel is doing in Sheikh Jarrah is ethnic cleansing. Protest this Friday at 6pm outside the Israeli embassy. #SaveSheikhJarrah #FreePalestine 🇵🇸 pic.twitter.com/xqU2qkgNLP

The victories against Elbit in Oldham and Shenstone show that direct action works, so we must continue the fight against British complicity with Israeli apartheid, ethnic cleansing and settler-colonialism.