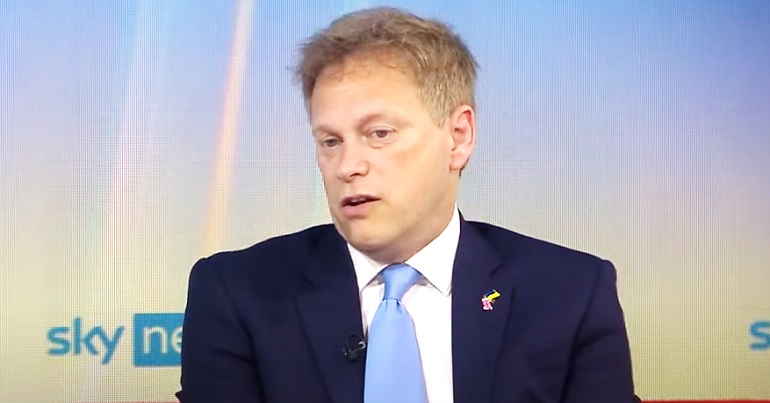 Grant Shapps’ inevitable car crash on breakfast TV was as horrific as it was odious. Then, enter the Mirror to lay cover for the toxic transport secretary. The outlet glossed over Shapps’ blatant lying by calling it “bizarre”, while other outlets didn’t mention it at all.

PA reported on the ongoing partygate scandal amid ITV News publishing photos of one of the events. They show Boris Johnson raising a glass, surrounded by colleagues and wine bottles. It was at the leaving do for communications chief Lee Cain on 13 November 2020. The leaving do took place just days after the PM had ordered England’s second national lockdown. Downing Street has declined to defend the scenes ahead of the publication of Sue Gray’s inquiry. A No.10 source told PA that they expect Gray to publish the report on Wednesday 25 May.

As PA noted, there were at least eight other people in the room. This was when the government had banned people from social mixing, other than to meet one person outside. The Met police have fined at least one individual for an event on that date. But they’re facing calls to explain why Johnson wasn’t fined over that event. This is despite the photos showing him, drink in hand, standing by a table strewn with food and wine bottles.

Of course, if you’re Shapps then the explanation is easy – he claims Johnson didn’t know it was a party.

As Sky News reported, Shapps told it that:

The question is, was he down there partying? No, clearly not – he’d gone by to say thanks and raise a glass to a colleague who was leaving.

It looks to me like he goes down on his way out of the office and thanks the staff and raises a glass and doesn’t in his mind recognise that as a party.

But Shapps went further. As the Mirror reported, he also claimed:

I don’t think these things should have happened, but I think it’s probably worth recalling in context that throughout this period the Prime Minister himself had been extremely ill, had a close brush with coronavirus, he lost his mum during the period, he was dealing with the pandemic.

We have a winner…

The best Tory lie so far

…given she died 10 months after the party pic.twitter.com/ahg2BbDD9W

The Mirror noted that Johnson’s mum died ten months later. So in other words, either Shapps got his dates muddled up, or he was lying.

When is Shapps’ lie not a lie?

Not that the Mirror could bring itself to say ‘Shapps lied’. It framed this blatant fib as “bizarre“. But at least it questioned his claim – however Manchester Evening News (MEN), the Guardian and Sky News (which Shapps was speaking to) all failed to even mention his lie about Johnson’s mother.

The point being, the corporate media’s failure to state the obvious is part of the reason we’re in this mess in the first place. Its subservience to power and client journalism has always laid cover for the political class in the UK. Now, when the end result is an authoritarian, corporate fascist government which thinks it’s above the law, the corporate media still can’t tell the truth. They’ve made their bed, and one for the rest of us too, but they continue to lie in it the same way they always have.