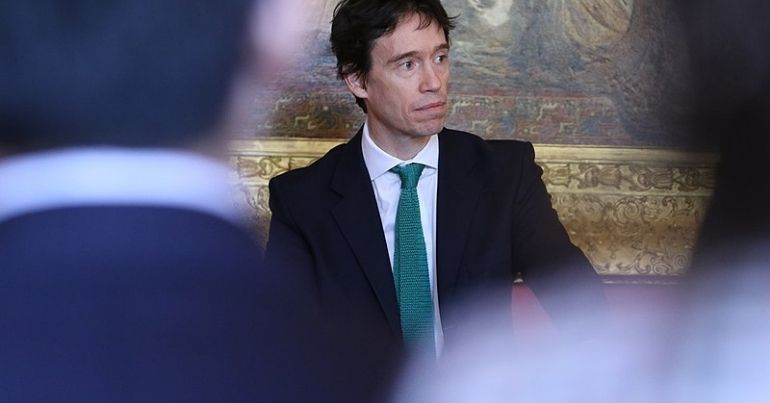 And yet again their shout for PM is one Rory Stewart. Yes, the former Tory MP, ex-development secretary and deputy governor of an Iraqi province. That’s right, an arch-Tory and imperialist.

Yes, that Rory Stewart. ‘Tory’ Rory whose voting record shows him to be to working class people what footballer Kurt Zouma is to cats. That is to say, quite vicious.

It came after Stewart, who stepped down as an MP in 2019, criticized Boris Johnson over Partygate on GMB news. He tweeted the crux of argument here:

The fact that it has had to be said repeatedly over so many incidents over so much time – does not change the fundamental truth:
Boris Johnson is manifestly unsuitable to be Prime- minister. Every day he remains further damages the country.
Speaking now on @GMB @RestIsPolitics

The centrists are at it again

Immediately and predictably, people with FBPE (Follow Back Pro Europe) in their bios and sundry other centrists decided Tory Rory was a shoe-in for the next PM – forgetting he is not an MP and so he can’t even run:

Huh? The only people who have a say in the matter are Tory MPs. Stewart isn't in parliament and would have to stand in an election. So, for that to happen a Tory MP would have to resign and trigger a by-election.

You didn't think of that, did you? https://t.co/NvcldVGQYq

Other social media users also overlooked the fact their favourite Tory literally can’t run for leader anyway. Which probably says something about the centrist grip on reality:

Dear members of the 1922 Committee, there is an alternative to having a Convict as Prime Minister. https://t.co/b87tj09qP7

Others went for the timeworn centrist trope of saying they weren’t a conservative but they were all for Rory. Backing Tories, of course, is absolutely not Tory behaviour:

I am not a Conservative and would never vote Conservative, but god, what a different place this country would have been in if Rory Stewart had won the last Tory leadership election. #bbcpm #c4news https://t.co/thB1GwrdyA

Others seem to have only recently discovered Tory Rory, despite the fact that centrists seem to fall in love with him every few months or so:

Rory Stewart is going up in my estimation https://t.co/3ntWmKiBIT

One Twitter genius was absolutely convinced that the country would be vastly better if it was led by Stewart:

Rory Stewart the greatest PM that never was. Imagine had he won and how much better our country would be! https://t.co/9xmBIfqRNH

Of course this ignores the fact that for a number of years, Rory Stewart was in office. He was literally an elected MP in government, and spent time leading the now-defunct Department for International Development.

And he voted for some of the absolute worst Tory polices, like the good little Tory he is. Let’s take a look at Rory’s greatest hits during his time as an MP.

Stewart voted strongly against public ownership of rail and buses; for tuition fees and against helping young people in training and further education; for harsher immigration policies and mass surveillance; for anti-trade union restrictions; and in favour of war and nuclear weapons.

Interestingly, given his FBPE fanbase, he voted against EU integration and the right for EU citizens to stay in the UK. He virtually always voted against those on benefits, including those who are disabled or suffering from long-term illness.

Stewart resisted an elected upper house, empowering local councils and proportional representation. He opposed laws to increase human rights and equality. And he opposed laws which would prevent climate change and for selling off publicly owned forests.

It is bizarre that centrists, who pride themselves on being the ‘adults in the room’, still haven’t learned how to use a search engine. We can’t wait to see who they pick as their next favourite ‘nice’ Tory.

Featured image via Wikimedia Commons/Foreign and Commonwealth Office, cropped to 770 x 403, licenced under CC BY 2.0.