Calls for US politicians, gun lobby and manufacturers to face legal action over massacres - Canary 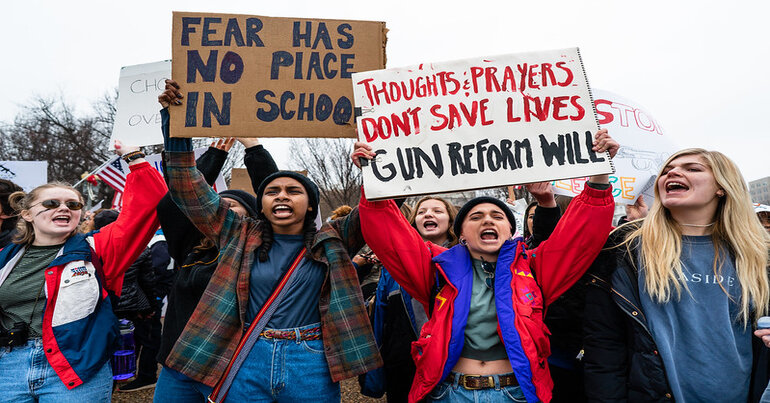 News of the massacre in Uvalde, Texas has focussed on the shocking one hour delay before police entered the building where 18 year-old shooter Salvador Ramos was still at large. Altogether Ramos killed 19 elementary school children and two teachers.

In the aftermath US president Joe Biden pleaded that “It’s time to turn this pain into action”, but without specifying what form that action could take. In contrast, the National Rifle Association (NRA) went ahead with its annual convention in Houston, arguing against gun controls and for more arms training for teachers and other school personnel. Around 500 protesters gathered outside the convention to jeer at the NRA attendees, though the speakers inside the building gave no ground.

And so America’s obsession with guns remains unabated, with little or no change to the gun culture expected.

Who is to blame?

A tweeter made it clear who in their mind is to blame for these killings – it’s not just the shooter:

I hold Republicans accountable for all these children, human beings and innocents being murdered by guns. Stop blaming mental health, video games and lack of “faith” for all this bloodshed. #GunControl #RepublicansAreTheProblem #NRAIsATerroristOrganization #VoteOutAllRepublicans

One response pointed out that the article in the US constitution on the right to bear arms was perhaps valid for the War of Independence but not since:

The right to bear arms was written during the American Revolution when people needed to defend themselves, their families & their land from the British. So, why do we need AR 15s or other assault weapons in the 21st century? With whom are we at war?

Golden State Warriors basketball coach Steve Kerr gave his early and very emotional reaction to the news of the massacre in Uvalde. He also spoke about the killing of Black people by a white supremacist in a Buffalo (New York state) supermarket, and the shooting of parishioners at a Taiwanese church in southern California. Kerr went on to say how “50 senators”, in order to retain power, are refusing to vote on H.R.8 legislation to require background checks for all people buying arms:

The gun used by the Uvalde shooter was made by Daniel Defense (DD):

Can you imagine a beer or tobacco company using a toddler to sell, promote, justify the selling of its products the way gun maker Daniel Defense did with this ad?

And yet this ad was barely noticed or condemned until an 18 year old bought a similar rifle and shot up a school. pic.twitter.com/apAebpYPFT

Semi-automatic weapons made by DD were also used in the 2017 Las Vegas massacre that saw 58 people killed and nearly 500 wounded.

Donald Trump, meanwhile, made it clear that the latest massacres are a threat to the NRA – which must “prevail”, he added:

"We will prevail. As our Bill of Rights says in those clear and immortal words: 'The right of the People to keep and bear arms shall not be infringed.'"

And Republican senator Ted Cruz trotted out the usual mantra that “armed bad guys” are stopped by “armed good guys”. That is ironic, given the armed police in Uvalde failed to do just that:

One tweeter made it clear who they believe has blood on their hands:

The individuals who carried out these shootings are ultimately responsible for the killings. But responsibility also lies with the arms manufacturers and the store owners that sell the guns – never mind the politicians who enable widespread gun ownership and the gun lobby. They each and all play a part in these massacres.

Cgeck out the "Personal Defense" section on their website and tell me if it's EVER appropriate for them to appear ANYWHERE to promote their weapons of mass slaughter.

Start with them and class-action sue them into dust. https://t.co/feVFzPrz5H

Attorneys should begin specializing in Mass Shooting Civil Litigation. Class Action Lawsuits should be filed against State Legislatures who have passed lax gun laws with no background checks.

And this tweet proposed legal action against the NRA:

CLASS ACTION LAW SUIT?
America vs. NRA! Let's lawyer up and make this happen! Could easily bankrupt them and create real change! 😬

Over many, many years, America has seen massacre after massacre. Since 1970, there have been an average of 40 school shootings every year in the US. This amounts to 2052 incidents with 661 people killed.

But it’s not just guns that kill people. It’s the shooters and the thousands of people who make up the gun supply chain. That supply chain includes the NRA, the gun manufacturers and sellers, and those federal and state politicians who refuse to restrict gun availability. Here is a list of US senators who reportedly have received the most donations from the NRA.

Perhaps class action against individuals involved in this supply chain is the only option left that might break the log-jam on gun reforms. For citizens need to take the initiative if they are to ever free themselves from their nation’s crazed obsession with guns and killings.