Energy giant Shell had a bad week, the next one could be even worse 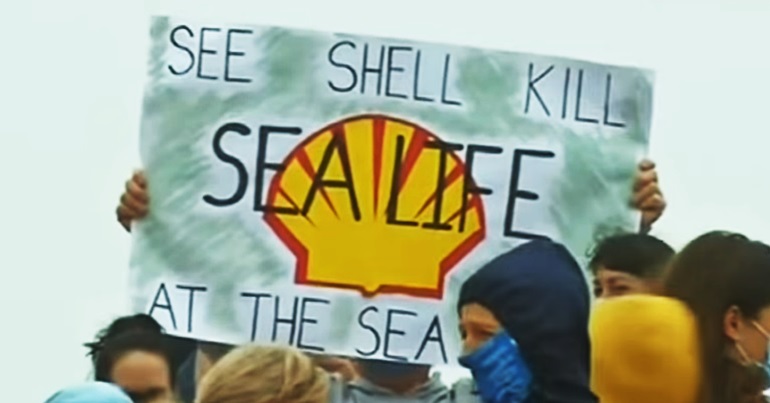 Energy giant Shell took a reputational hit on 23 May. A longstanding consultant quit, accusing the company of enduring and wilful environmental harm, in a dramatic and very public fashion.

The coming week could be even worse for the dirty energy behemoth. That’s because a court hearing begins on 30 May in South Africa – one which could ruin its plans to blast the ocean in search of more fossil fuels.

Save the Wild Coast

As The Canary previously reported, a number of groups and communities mounted legal action against Shell towards the end of 2021. The cases opposed the company’s imminent plans to conduct seismic testing along the Wild Coast. Such tests indicate whether there are fossil fuels present under the sea floor. It involves blasting the ocean with sound pulses on a regular basis over a period of months.

As the Daily Maverick reported, current scientific evidence shows that seismic surveys widely and negatively impact ocean ecosystems, from tiny organisms like zooplankton to large mammals such as whales.

Natural Justice and other environmental and human rights-focused groups filed an urgent interdict application at the end of November. The judge in that case ruled against them, so Shell started its testing. Wild Coast community members and groups filed a further urgent interdict in early December. The judge ruled in their favour. The judgment put a stop to Shell’s seismic activities, pending further legal proceedings.

Those legal proceedings are due to take place between 30 May and 1 June. In the interim, two groups involved in the earlier case – Wild Justice and Greenpeace Africa – have applied to join the case brought by Wild Coast community members and groups. So the upcoming proceedings will also consider that joinder application.

The Department of Mineral Resources and Energy, meanwhile, stands accused of failing to consider both climate change and the interests of the “whole community”, including non-human ocean dwellers, when granting the exploration rights.

In the previous proceedings, Shell argued that its EMPr serves as a NEMA authorisation. In a post about the Wild Coast situation, the company’s website asserts:

We aim to minimise the impact of our projects on the environment and to be a good neighbour wherever we work, by contributing to the well-being of neighbouring communities.

The climate group Follow This recently provided Shell an opportunity to back up its claim to be a ‘good neighbour’, environmentally-speaking. The group, which attempts to secure change “from the inside” through proposing resolutions at shareholder meetings, called for the company to strengthen its climate goals at its AGM on 24 May.

As the Guardian reported, Shell’s board urged investors to reject the Follow This resolution. Ultimately, the resolution only received 20% of the votes, meaning it failed to pass.

Shell’s opposition to the proposal gives further weight to Caroline Dennett’s characterisation of the company. The safety consultant, who worked with Shell for 11 years, dramatically quit on 23 May. In a LinkedIn post explaining the decision, she said:

Shell is fully aware that their continued oil & gas extraction and expansion projects are causing extreme harms, to our climate, environment, nature and to people.

The consultant accused the company of “double-talk” on climate and a “disregard” for the risks involved.

The evidence clearly shows that fossil fuel companies like Shell continue to put their inflated bottom lines first in the face of the climate and biodiversity crises.

Legal action, such as the imminent hearing in South Africa, provides an opportunity to force at least some of their expansion plans into reverse.